Taking on Big Pharma Can Help Biden Win a Landslide

As we enter the final weeks of the 2020 campaign, Joe Biden has opened up a big lead over President Donald Trump, thanks in part to a renewed focus on the working class. The former vice president has sharpened his rhetoric against the wealthy on the trail, and put his blue-collar roots at the center of his closing argument. It’s a shift progressives should applaud, and the Trump campaign should fear.

But Biden can’t afford to take his foot off the gas, even as the president’s bout with coronavirus and refusal to learn anything from the illness swallows news cycle after news cycle.

To the contrary, Biden should take the “Scranton vs. Park Avenue” mantra a step further. We believe Democrats up and down the ballot can secure huge victories by focusing in the final three weeks on corporate greed, and our new research suggests the best target is Big Pharma.

The pharmaceutical industry is the perfect foil to symbolize corporate greed, because so many voters have experienced its price gouging first hand. Nearly one in four Americans have not filled a prescription because the cost of their drugs was too high. Roughly one-in-three diabetics report having rationed insulin, the price of which has tripled on average since 2002, notwithstanding Trump’s ludicrous claim at the first debate that it’s “cheap…like water.” Ibrance, a cancer medication developed by Pfizer, now costs over $13,000 per month, up from an already-expensive $9,850 per month in 2015. Following years of stories about the skyrocketing cost of life-saving drugs and a stagnant drug-discovery pipeline, the coronavirus pandemic is finally putting the drug industry’s greed under a national spotlight, and voters are rightly disgusted.

It should come as no surprise that our new testing finds that a message focused on Big Pharma greed and policy proposals to make prescription drugs more affordable has broad appeal across the country.

Late last month, we tested television ads about Big Pharma’s greed with voters in the critical swing states of Iowa, North Carolina, Maine and Arizona. The reason we focused on this message is that the rising costs of prescription drugs consistently polls as a major concern of voters from all political parties, and the coronavirus pandemic has put drug companies in the spotlight. 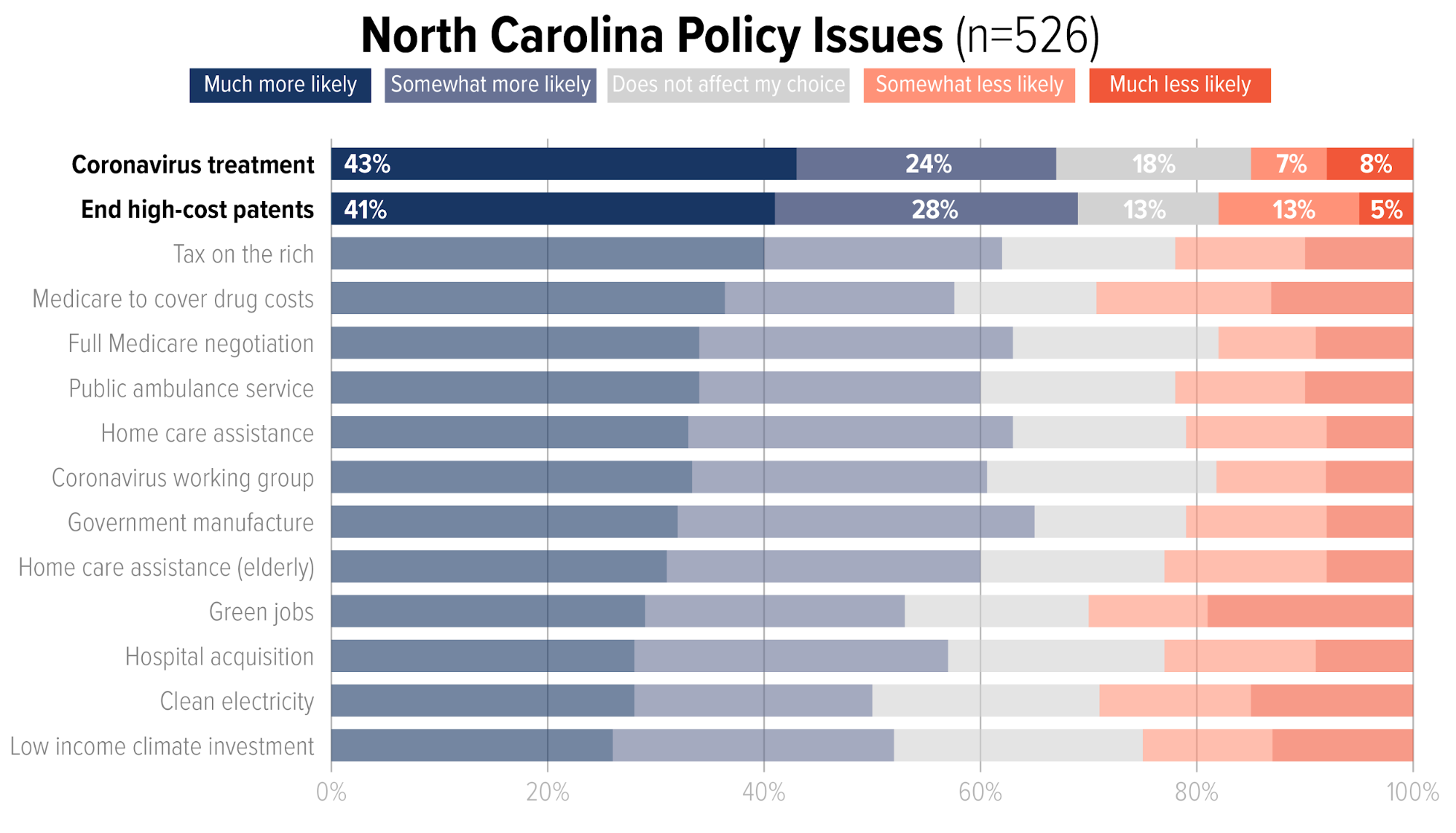 In the 30-second spot, health care activist Ady Barkan, who is dying of ALS, tells viewers a straightforward story. “Sick people like me should be spending precious time with the people they love, not fighting Big Pharma to pay for the medicine we need to live,” Barkan says. He goes on to call out sitting senators for taking donations from Big Pharma at a time when Americans need them to push for coronavirus treatments to be free for all.

That message proved salient, and poignant; overall, the ad swings 5.8 percent of voters in the direction of the Democrat running for Senate in each state. In an age of increased polarization when seemingly nothing breaks through, it’s a rare message with the ability to persuade and change minds. The groups that move the most are older voters at 9.4 percent, young voters at 8.8 percent and Trump voters at 8.6 percent, all of whom become more supportive of Democratic candidates after hearing this message. It’s no coincidence that Trump has repeatedly and falsely claimed to have lowered drug prices and to have been an enemy of Big Pharma. He understands how serious this liability is, too.

Biden and his team are wisely working hard to close off Trump’s path to working class voters, and taking on Big Pharma’s greed just as the vice president’s lead has swelled is a concrete way to validate his recent rhetoric. Attacking pharmaceutical industry greed, speaking directly to the pain of working people who have been stuck with growing bills for no good reason, and promoting clear ideas to make medication cheaper for the vast majority of Americans—all of it dovetails with the campaign’s framing of this election as a choice between Scranton and Park Avenue. And what can a president who just received the best health care and drug treatment taxpayer money can buy say in response?

If Democrats win this election, it will be because in the final weeks of the campaign, when the average American finally began paying attention to the race, they cinched working-class voters. Biden and his campaign clearly understand this and have been admirably focused on sending that message, ignoring a lot of meaningless noise along the way.

Putting a real focus on the pharmaceutical industry and drug prices—an issue with particular salience in the middle of a global pandemic—makes that message concrete, and answers a question for voters that essentially all politics boils down to. How will my life change if I vote for you? In these messages and proposals, there’s a clear answer.

Liz Jaff is the president of Be A Hero PAC.

Sean McElwee is the executive director of Data for Progress.