If you knew nothing about the so-called Nunes memo before Donald Trump declassified it and House Republicans released it to the public, you would have a hard time discerning from the ensuing news coverage that literally every subject-matter expert who isn’t a paid Trump lackey or disingenuous partisan believes the memo was a joke—a childlike attempt to fabricate a scandal out of nothing, and also a scandal in its own right. 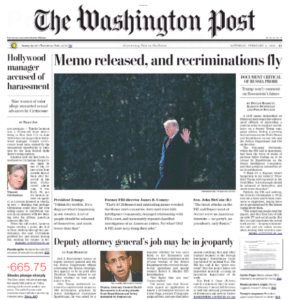 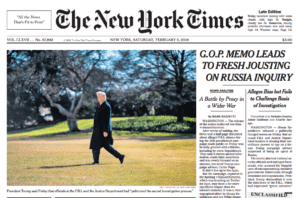 Fox News, and most of the right-wing media, by contrast, didn’t portray the memo in an ambiguous way at all. On the right, the memo didn’t create a partisan row, or “inflame tensions”—it uncovered evidence that should discredit the Justice Department’s Russia investigation, and vindicated Trump’s desire to purge and replace the senior ranks of DOJ and the FBI with loyalists.

Meanwhile, Fox is going with the lie. pic.twitter.com/eHR9u9YtOn

Everyone in the know knows the Nunes memo was a flop on the merits; but the public at large is for the most part getting two perspectives on it: One, from the right’s vast propaganda apparatus, in which House Intelligence Committee Chairman Devin Nunes delivered the promised goods on an explosive conspiracy to sabotage Trump, and one from the mainstream press in which ¯\_(ツ)_/¯. One where the truth is certain, and one where it is hard to discern because Democratic and Republican interpretations differ.

To that end, the Nunes memo was an extraordinary success, and an invitation for Nunes and the House GOP to engage in more antic dissimulation, until either Trump feels he has the cover he needs to fire special counsel Robert Mueller, or Republican voters are so convinced that Trump is the victim of dirty tricks that they don’t blink when Mueller reveals his findings, don’t blink when House Republicans ignore them, don’t blink when Trump issues pardons for his family members and campaign team.

The point is not that the mainstream press should just tell the world the opposite of what Fox News says, but that journalists in the Trump era can’t edify the public without updating their professional mores to account for the words and deeds of newsmakers who speak and act in bad faith.

On the day #ReleaseTheMemo went viral on Twitter, journalists could watch in real time as the hashtag spread from bots and the pro-Trump fringe, to the trending topics, to Fox News, and ultimately into mainstream coverage. Reporters unearthed the central allegation contained in the Nunes memo—that the DOJ included portions of the famed Trump-Russia dossier in its affidavit seeking a warrant to wiretap former Trump campaign volunteer Carter Page—and exposed it as a non sequitur two weeks ago. They learned that Trump had told confidants that he hoped to use the memo as a pretext to fire Deputy Attorney General Rod Rosenstein, who oversees the Mueller investigation, days ago.

There is hardly a person at work in politics who didn’t piece together, long before he published the memo, that Nunes choreographed his stunt in order to mislead and confuse the public. That early in his ongoing and multifarious efforts to obstruct and discredit the Russia investigation, Trump recruited and compromised the House intel chair, and nearly the entire GOP has agreed to play along, deploying arguments (about coup plots, and about civil liberties) that they plainly don’t believe.

That story doesn’t take any meaningful interpretive license with the facts, it is just what’s happening in front of our eyes. A more slanted, but I believe equally accurate version is that Trump is attempting to perpetrate a modern-day, slow-motion Saturday Night Massacre, with the complicity of most congressional Republicans and the conservative media.

It’s an amazing story! The kind that might ultimately come to define our current political moment. A story people will believe, but only if they are told it’s happening, and shown its true. But in absence of discourse norms that allow reporters to treat bad faith for what it is, the truth is by necessity being subordinated to an alternate reality in which partisan anger is running high and views on the shape of the Earth differ; in which the centrist punditry confines itself to examining how well Republicans executed the Nunes stunt rather than on the scandalousness of the stunt’s underlying purpose.

They Have A Plan

The plan: manufacture as much propaganda for Trump’s campaign as possible ahead of the election, then use police power and the justice system to overturn or call into question the will of the people.

In the fight to stop Trump, Democrats have put all their egg in a single basket in the hope the most volatile and crooked president in American history doesn’t knock it over.

The stakes are too high in this election to litmus tests allies, but the attention the Lincoln Project has received doesn’t match its actual impact.

Democrats should say no to any further coronavirus legislation that doesn’t provide as much running room to Joe Biden as it will provide to President Trump.

Donald Trump Has A Secret Plan to Win (Seriously)

After what happened in 2016, it would be foolish to assume that Trump can’t rebound from his abysmal position and stumble into a second term.