Crooked Media has partnered with Change Research to conduct a series of polls. You can view the complete crosstabs here, and read more insights from Change here.

Arizona is home to one of the most dangerous voter suppression schemes in the country, as well as a Democratic senator who could be the deciding vote in passing legislation that would reform our elections and protect the voting rights of all Americans. To find out how Arizonans feel about these issues, Crooked Media and Change Research surveyed 1113 registered voters from March 17-20. A full summary of the survey’s methodology is available here.

Voting rights is a top issue for Arizona voters. In a list of 20 issues, it’s tied with immigration at 11 percent as voters’ second most important issue, right after fighting the pandemic (14 percent). Among just Biden voters, voting rights is a clear #2 at 18 percent—ahead of health care, the environment, civil rights, and education. It’s also the top issue for the more than 13 percent of Trump voters who say “voter fraud” is their top issue.

57 percent of Arizonans support the For the People Act, described as a bill which “ends dark money in politics, ends partisan gerrymandering, automatically registers citizens to vote if they’re eligible, expands in-person early voting, makes voting by mail simpler, and enhances election security with a paper trail for every ballot.”

The For the People Act’s individual provisions are popular—some overwhelmingly so. 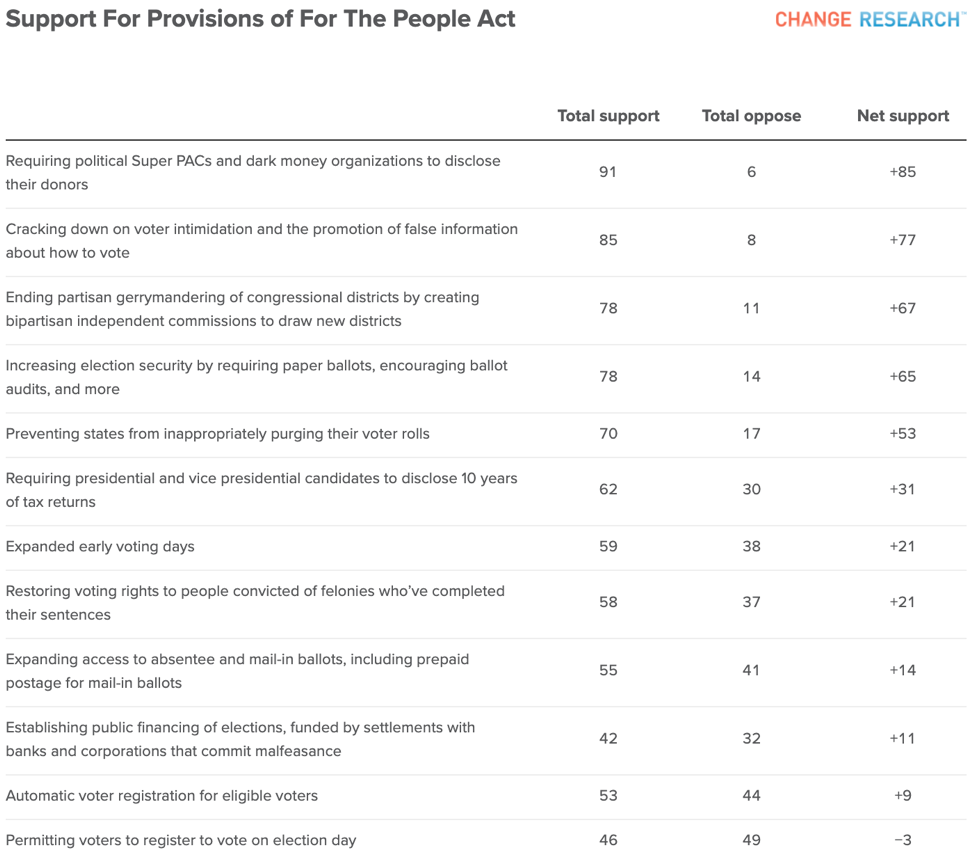 A plurality of Arizona voters support ending the filibuster to pass the For the People Act. 46 percent are in favor of this, 42 percent are opposed, and 11 percent aren’t sure.

The For the People Act gets less popular after Republican messaging—mainly because Republican voters learn that Democrats are the ones trying to pass it. After messaging questions and a rundown of what’s in the bill, support falls to 50 percent, while opposition rises to 43 percent. The drop is almost entirely a result of partisan sorting: those who stop supporting the bill after the messaging voted for Trump by an 84-11 margin.

Most Arizonans haven’t heard much about the Arizona GOP’s voter suppression bills. Just 49 percent have heard a decent amount or a lot about these bills.

Democratic voters aren’t thrilled with Senator Kyrsten Sinema, and it’s dragging her approval down. Like Joe Biden, Sen. Mark Kelly’s favorability rating is slightly underwater at 41-45 percent. But Sinema’s favorability is much worse at 27-44 (-17), driven mainly by Democrats only approving by 40-36. That said, many of her potential Republican challengers are deep underwater—the only Arizona Republican viewed favorably by more than 25% of voters is Cindy McCain.

Democrats need to do three things:

2)    Shine a light on the incredibly unpopular GOP suppression bills

The most effective messages we tested about the For the People Act emphasize the non-partisan elements that help voters of all backgrounds and all parties by taking on dark money, partisan gerrymandering, and disinformation about elections. 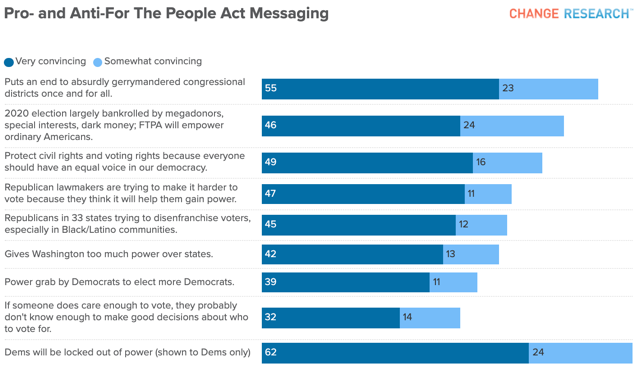