PollerCoaster: Why Democrats Must Go Big

Crooked Media has partnered with Change Research to conduct a series of polls. You can view the complete crosstabs here, and see more insights here.

After more than a decade, Democrats finally have control of the White House, Senate, and House albeit by historically narrow margins. With their newfound power, Democrats have a choice. Do they press their advantage in a potentially narrow window at the risk of overplaying their hand or do they curb their ambitions in search of bipartisan compromise?

This debate boils down to a political question about which strategy gives Democrats the best chance of holding onto their majorities in 2022. Many remain scarred by the 2010 midterms when one of the most successful legislative periods in history was followed by a devastating election that cost us control of the House and hampered Barack Obama’s ability to govern for the remaining six years of his presidency.

According to the latest Crooked Media/Change Research PollerCoaster poll, the answer is clear. Democrats have the opportunity—and the obligation—to go big. Amidst the raging pandemic and recession, the public has an affinity for Joe Biden’s agenda, an appetite for bold action, and little tolerance for obstruction. According to the poll, Democrats are much more likely to pay a price for doing too little to address the crises than too much.

Subscribe to What A Day to get more pithy analysis of the world we live in and how long that world can possibly continue to exist.
View all Newsletters

It is clear that Democrats have the upper hand politically with a popular agenda and a divided opposition that falls further out of the mainstream every day.

For the last week, Republicans have been shedding crocodile tears to every overly credulous reporter in town about how Biden is violating his unity pledge by pushing his agenda. They called his executive orders “divisive” and his COVID Relief proposal “Radical Left.”  The Republicans are wrong. Biden’s agenda is very popular. Our poll found that most of Biden’s top priorities are supported by at least 60 percent of registered voters. Levels of support above 60 percent are almost unheard of in such a highly polarized political environment. Biden’s agenda is supported by some voters who don’t even believe he is the legitimate winner of the election.

The poll asked respondents to identify their priorities from a list of issues. The results were clear. Voters are laser focused on the current crisis. The top three issues were all COVID related – vaccine distribution, economic relief, and stopping the spread of the virus. 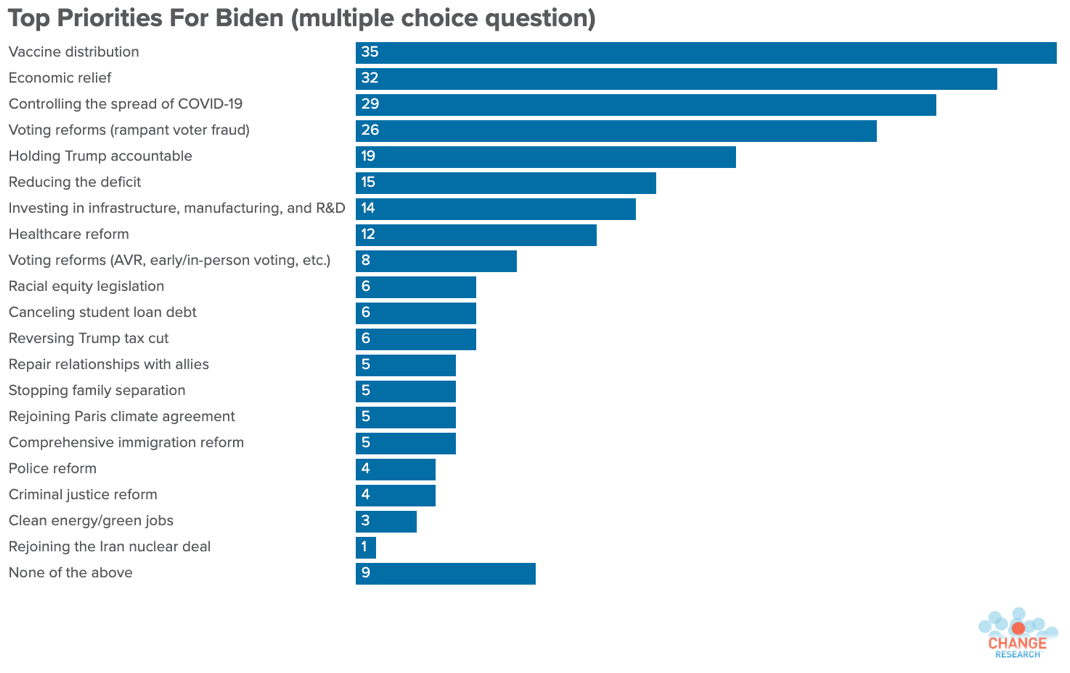 These findings make it clear that successfully dealing with the pandemic and the recession is the most important task for Biden and Congressional Democrats. In the short term at least, nothing else comes close to mattering as much.

This means pressing forward aggressively on passing the COVID Relief plan in the face of Republican opposition. When Republicans like Susan Collins complain that $1.9 trillion is too big of a price tag they are very much on the wrong side of public opinion. The danger for Democrats is doing too little, not too much.

Don’t Fall Into the Austerity Trap

Republicans rediscovering their totally sincere concern for debt and deficits the minute Biden was sworn in as President was as predictable as the sunrise. After spending trillions on phenomenally ineffective corporate tax cuts and massive, unnecessary increases in defense spending, Republicans are now talking about pinching pennies on vaccine funding, unemployment benefits, relief checks, and money to keep firefighters and teachers on the job. Republican success in 2010 was fueled in part by a revolt over spending after a stimulus bill, a bank bailout, and the Affordable Care Act (which actually reduced the deficit despite what Republicans claimed). In this poll, we tested the Republican austerity arguments and found them to be relatively ineffective. Framing Biden’s policies with Right Wing language about debt and deficits reduced support, but only by about 10 points. 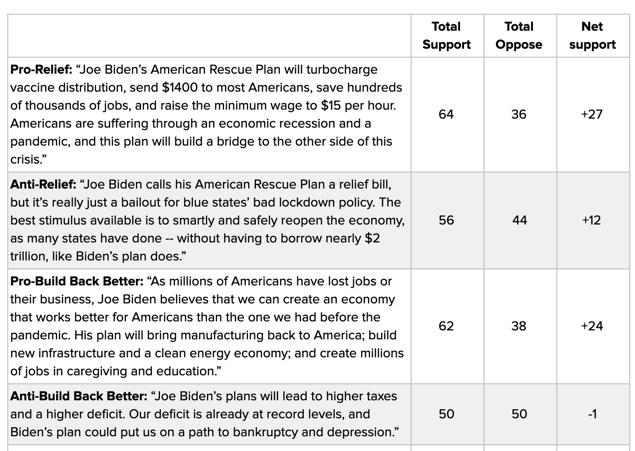 In other words, a majority of voters still supports Biden’s plans even though they add to the deficit. The findings should embolden Democrats to push for the policies that do the most good and dismiss bad-faith complaints from Republicans and others. Given the immense desire for action on COVID and the economy, trimming sails to appease faux deficit hawks would be a monumental political mistake.

The Price of Going Small

While this poll is very good news for President Biden and the Democrats, it also underscores the challenges they’ll face governing with such narrow majorities. Potentially unanimous Republican opposition and obstructive legislative tactics like the filibuster will hamper Democrats’ ability to deliver their agenda. But voters are demanding results regardless of how they get them.

Voters want compromise, but not at the expense of needed progress. By a margin of 64-27 voters would prefer that Democrats win the support of members of both parties, even if Democrats have to compromise on some of their priorities. However, given a choice between as much relief as possible with no Republican support or less relief with Republican support, voters prefer as much relief as possible 46 percent to 38 percent. Compromise is nice, but the voters prioritize relief.

Despite the affinity Sens. Joe Manchin (D-WV), Kyrsten Sinema (D-AZ), and others feel for the filibuster, the public is willing to throw it overboard to make progress. Voters favor eliminating the filibuster by an 8-point margin, and if Republicans used the filibuster to block a $15 minimum wage, they’d support ending it by a 14-point margin. The poll asked voters how they would feel if “Senate Republican Leader Mitch McConnell and Republicans in Congress do everything in their power to block Democrats from passing any laws, regardless of what the laws might do.” Nearly nine in 10 Biden voters would feel negatively if that happened. Allowing McConnell to block progress will diminish Democratic enthusiasm making the sky-high turnout that Democrats need to hold the House and the Senate nearly impossible to achieve. Given a choice between passing a big agenda by going around or eliminating the filibuster, and passing something smaller with bipartisan cooperation, this poll makes it clear that voters very much prefer the former.

It’s also worth noting that McConnell’s obstruct-everything strategy is not without risk. Nearly one quarter of Trump voters would have negative feelings if McConnell and the Republicans obstruct progress.

Good political strategy boils down to pushing messages and policies that unify your coalition while dividing the opposition. Democrats have an opportunity to take advantage of a divided Republican Party.

The post-Trump, post-coup Republican Party is a mess. The party’s favorable rating is 29 points underwater. Twenty-eight percent of Trump voters view their party unfavorably. Former Vice President Mike Pence is about as popular as coronavirus with a negative 21-point rating.

The most interesting divide, however, is on economic issues. Trump voters who make under $50,000 a year are much more supportive of Biden’s economic plans:

These are not huge numbers, but they are big enough to matter in a close election. Trump helped consolidate working class voters for the GOP.  Increasing support and turnout among these voters is how Trump won where Romney lost. This poll shows that delivering on populist economic policies could present Democrats an opportunity to win some of them back. This potential schism is something that they should explore in further research, but it’s a promising opportunity.

We are a long way from 2022. A million things can and will happen. But as we sit here today, the political path for the Democrats seems clear: Be bold and do everything possible to deliver on a popular agenda. The risks of doing too little greatly exceed the risks of doing too much.