The McConnell Majority Is More Endangered Than You Think

Senate Minority Leader Mitch McConnell of Ky. reacts to the loud amplified sound from banging the gavel as he checks out the stage at the Republican National Convention inside the Tampa Bay Times Forum, Monday, Aug. 27, 2012, in Tampa, Fla. (AP Photo/J. Scott Applewhite)

Senate Minority Leader Mitch McConnell of Ky. reacts to the loud amplified sound from banging the gavel as he checks out the stage at the Republican National Convention inside the Tampa Bay Times Forum, Monday, Aug. 27, 2012, in Tampa, Fla. (AP Photo/J. Scott Applewhite)
Written By Charlotte Swasey, Mari Urbina

Since 2007, Mitch McConnell has led the Republican conference in the United States Senate. In 2014, after a disastrous midterm election for Democrats, McConnell became majority leader of the “world’s most deliberative body” but has used that power ever since to bring the country to its knees. By failing to hold the Trump administration accountable, the GOP Senate majority has allowed poor leadership to cripple our economy, sow division among Americans, and trample on the hard-earned liberties we hold dear.

In 2019, McConnell took pride in calling himself the “Grim Reaper,” which prompted Democrats to decry his “legislative graveyard.” These political labels have tragic salience now that over 200,000 Americans have died of COVID-19. Meanwhile, the House passed a relief bill in May that would have fed struggling Americans and supported frontline workers, but Senate Republicans didn’t introduce a counterproposal until late July and have failed to pass it or anything else through their chamber in the months since.

In 2020, the senators who brought McConnell to power are up for election, and many are in danger of losing. Republicans must defend 23 Senate seats while only 12 Democrats are up for re-election. The map places them on defense in many races, while an extremely unpopular president sits atop the ticket. McConnell himself is also widely disliked.

For much of the 2020 election cycle, strategists and forecasters looked at a narrow list of vulnerable incumbents in Arizona, Maine, Colorado, and North Carolina. Over the past six months, it has become clear that the party’s majority is far more vulnerable than that. GOP senators in Iowa, Montana, and Georgia are endangered, too, and Democrats are in a strong position to win all of those races. However, during the past month it has become clear that an even wider map of GOP Senators may be vulnerable thanks to great Democratic candidates in places like Alaska, Kansas, South Carolina, and even Texas.

Last weekend, millions of Americans mourned the passing of Supreme Court Justice Ruth Bader Ginsburg. Hundreds of thousands of people also responded by donating money to the opponents of McConnell’s frontline members. The Get Mitch or Die Trying Fund has raised over $20 million in a week to directly support 13 Democratic Senate candidates.

At Indivisible, our local grassroots chapters have been organizing for years in parts of the country the Washington political establishment has written off. The Payback Project currently targets 12 senators with a mass-awareness campaign to expose the truth of their complicity in Trump’s failures. We’ve been making calls, talking to our neighbors, and activating voters.

We’ve known for a long time that this Senate election will not be decided in just a few states. Today, we’re excited to announce a partnership between Indivisible and Data for Progress to provide high-quality public-opinion polls. The Data For Progress methodology of contacting voters via text messages and through online surveys has been highly accurate the past few years.

First, Democrats are positioned to win races that weren’t on the map a year ago; second, voters broadly support progressive policies to deal with coronavirus and fix our economy.

Here’s the first round of state data: 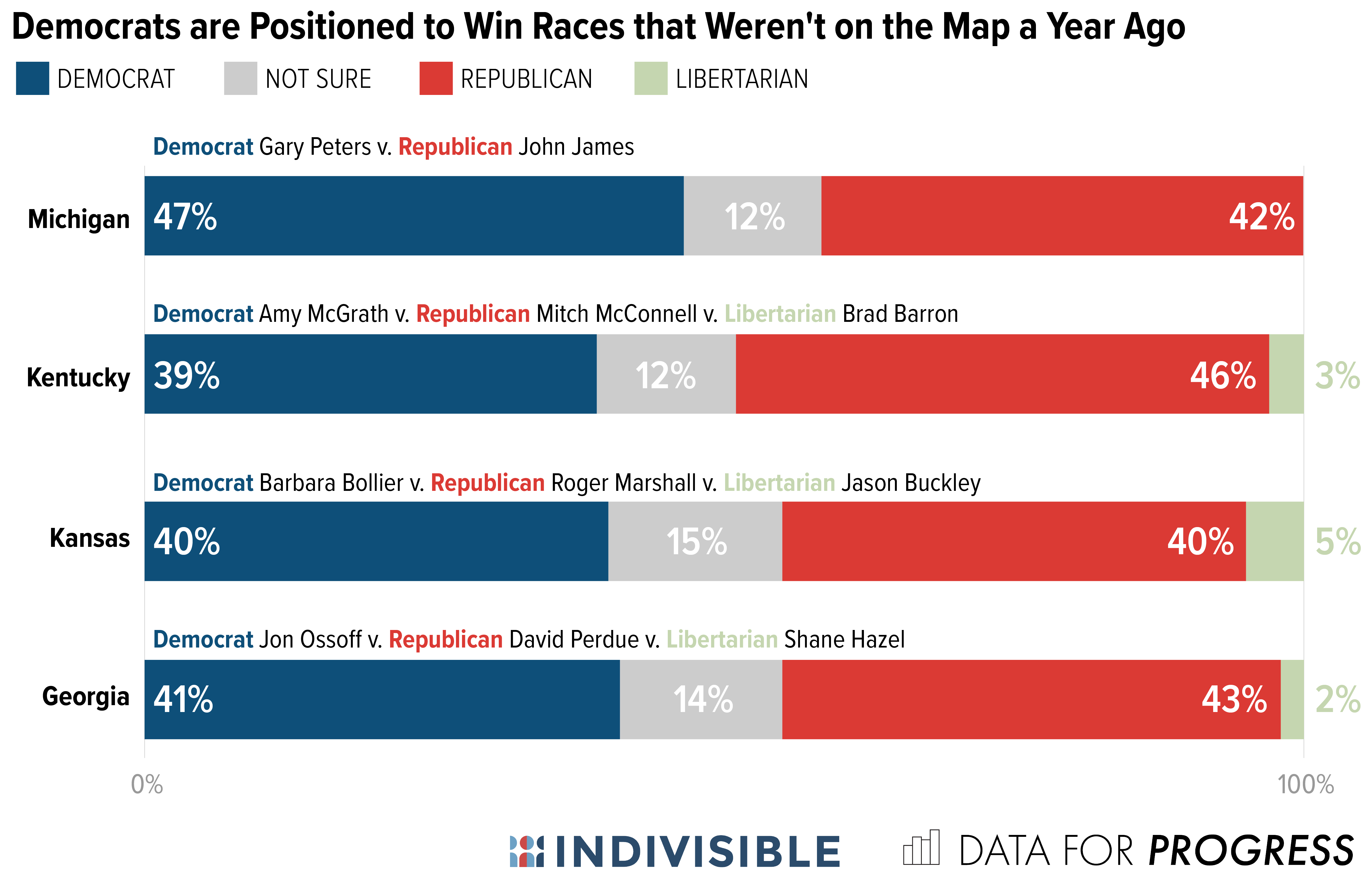 Over the coming weeks, McConnell’s majority will turn its attention to rushing a lifetime appointment to the Supreme Court through the confirmation process. They could instead be supporting relief for Americans struggling to survive a pandemic that has done more damage to the U.S. than any peer nations with more competent leaders. We found big majorities of voters in these states support:

All of our data is publicly available here, and we will publish more surveys next week at the Data for Progress 2020 Senate Project. Donate to Get Mitch or Die Trying and volunteer with Indivisible at the Payback Project!

Charlotte Swasey is the Vice President of Data and Polling at Data for Progress. Follow her on Twitter @charlotteeffect.