Crooked Media has partnered with Change Research to conduct a series of battleground polls. You can view the complete toplines here, and read more insights from Change here.

McAuliffe initially leads 49-43. Princess Blanding is at 3%, while 5% are undecided. We see almost no movement after messaging, with each candidate gaining less than half a percent. 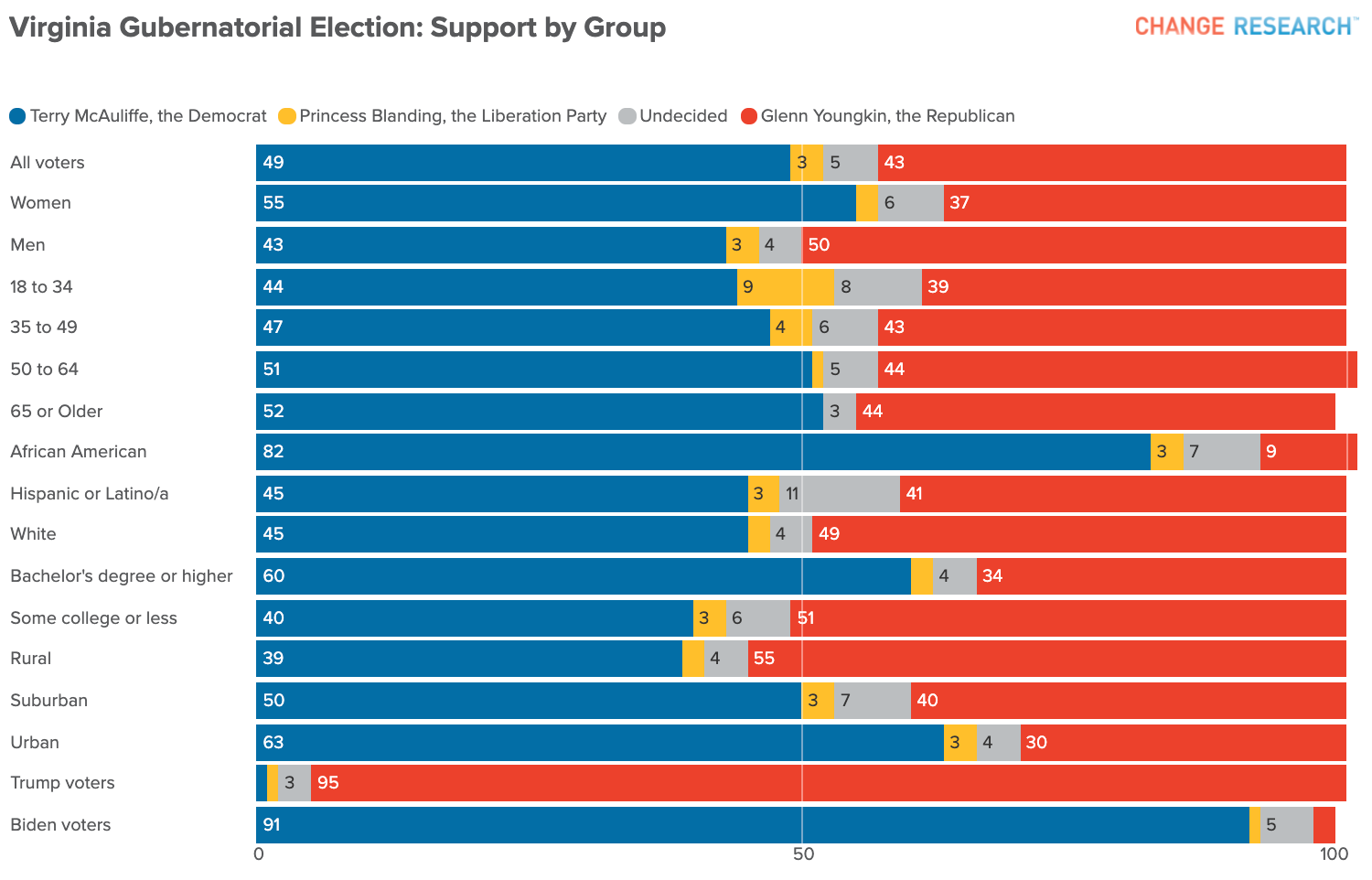 McAuliffe and Youngkin voters say they’re roughly equally likely to vote. Still, there are a few reasons McAuliffe’s campaign should not rest on its laurels:

Vaccination status is strongly tied to vote choice. While McAuliffe leads 63-31 among fully vaccinated voters, Youngkin is up 86 to 5 among those who are not fully vaccinated. 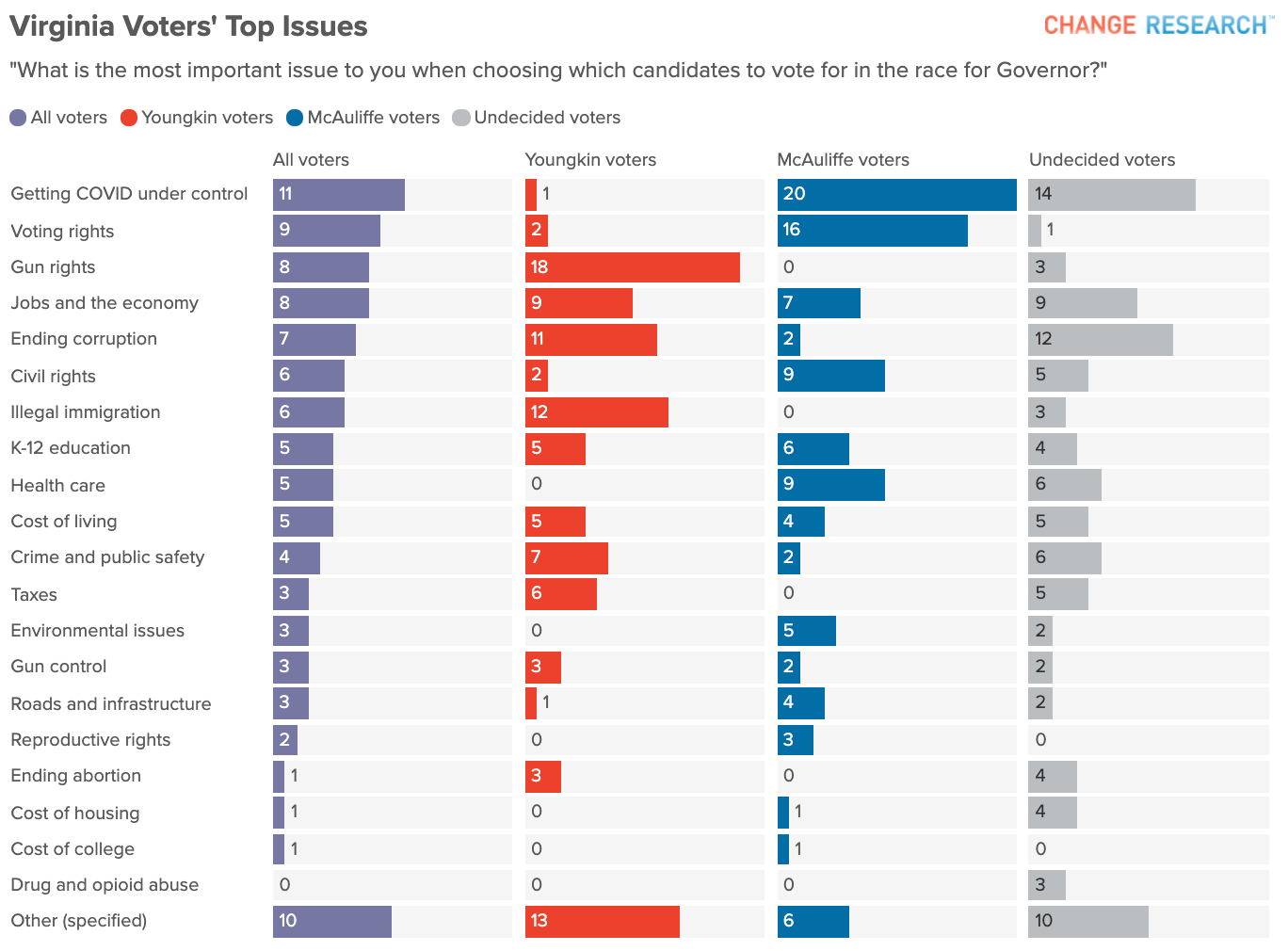 Virginians disagree on the state’s direction and its leaders, but agree on hating Trump

49% of likely voters say the state is headed in the right direction, while 51% say it’s on the wrong track. But there’s near-complete political polarization on this question: 91% of Democrats and Democratic-leaning independents say “right track,” while 96% of Republicans and learners say “wrong direction.”

We see similar trends when it comes to politicians. Unlike in our previous PollerCoaster poll—where Arizonans were moderately favorable toward Mark Kelly but hated just about every other Arizonan official on both sides of the aisle—Virginians split nearly evenly on almost every major political figure. Both gubernatorial candidates, as well as the incumbent governor, both U.S. senators, the president and the vice president, have net favorability ratings between -5 and +5.

There are two strong exceptions: Donald Trump’s net favorability is -20, and the Republican Party’s is -21. So it’s no wonder that our message tying Glenn Youngkin to Donald Trump made people angrier than any other message we tested.

37% of Youngkin voters are voting for him mostly to oppose McAuliffe, while only 23% of McAuliffe voters say the same about Youngkin. Another 8% of Youngkin voters will vote for him because Trump told them to. 65% of McAuliffe voters are drawn to him because of his record or his plans, while only 49% are drawn to Youngkin because of his record or plans.

Voters favor safety-oriented Covid policies, but are not convinced that they help the economy

Virginians are generally in favor of Covid prevention measures:

Yet, McAuliffe is tied with Youngkin on who will help businesses recover from the pandemic. If McAuliffe can point to closed businesses and schools and high case rates in states that have adopted plans like Youngkin’s, he can make the case that getting the disease under control is the best way to get the economy up and running and open schools. Voters already agree with him that these policies are responsible; he still needs to convince many of them that it’s also economically beneficial.

McAuliffe’s biggest advantages are on income inequality, climate change, education, abortion, and addressing rising housing costs. (We found that 59% of Virginia voters want abortion to be legal in most or all cases.) Youngkin has an advantage on rural issues. The two candidates are virtually tied on helping businesses recover from the pandemic and gun policy.

Some Republicans believe the GOP is headed in the wrong direction

Overall, 47% of voters believe the Democratic Party is headed in the right direction, while 51% say it’s going in the wrong direction. There’s very strong polarization between members of the two parties. Notably, 59% of independents who lean toward neither party say Democrats are headed strongly in the wrong direction.

Who are the Republicans who don’t like the direction of the GOP? They’re largely 50-64 year old white voters in Northern Virginia. For some of them, the problem is that the party is not Trumpy enough. But a large number are Never Trumpers. 51% of these “wrong-direction Republicans” feel unfavorable or neutral toward Trump. 84% of them voted for him anyway—but the 16% who didn’t far outnumber anti-Trump defections among most other groups of Republicans.

Violent crime, climate are most widely held fears; voters polarized on all other threats

Overall, Virginians see their greatest threat as violent crime, with 79% saying it’s at least a medium-sized threat. The only other threat seen as medium-sized or larger by more than 60% of voters is climate change. All other items—from voter suppression to voter fraud, illegal immigration to white supremacy to socialism to critical race theory—evenly divide Virginia voters.

But among Democrats, there’s near unanimity on two threats: climate change and white supremacy. On voter suppression and violent crime, significant numbers of Democrats see them as only minor threats.

To Republicans, meanwhile, socialism and critical race theory are the two greatest threats facing Virginia; illegal immigration and voter fraud are just slightly behind. Unsurprisingly, there are significant differences between Republicans who consume right-wing media and those who don’t. But even among Republicans who only consume mainstream media, over 80% view socialism, critical race theory, illegal immigration, and voter fraud as medium or large threats. 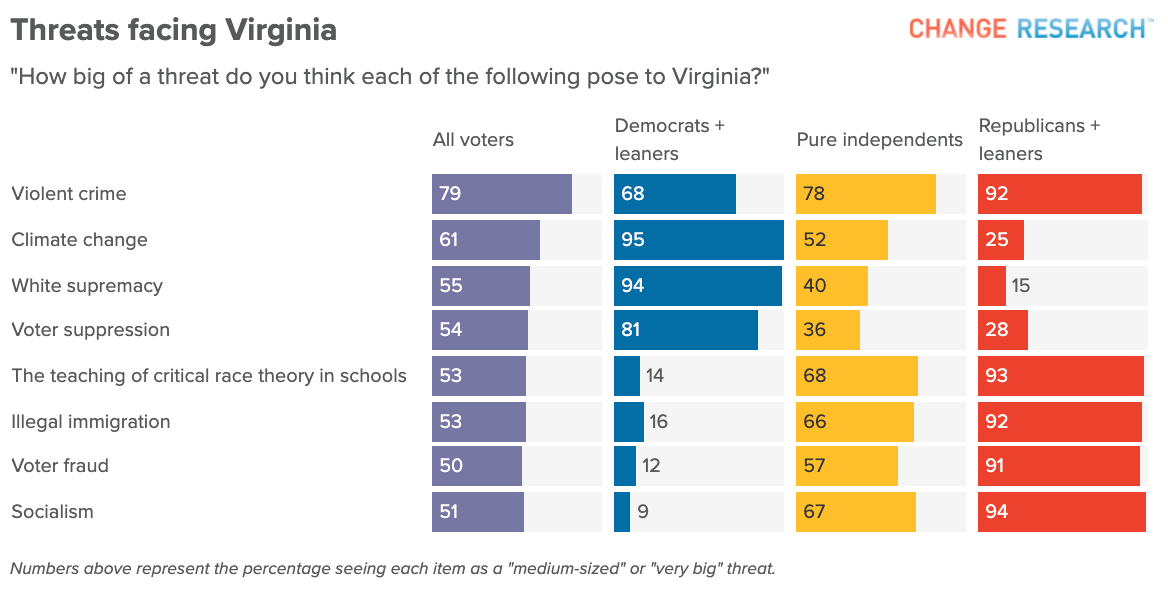 Critical Race Theory a big concern; “Teachers should decide what they teach, not Congress” is effective 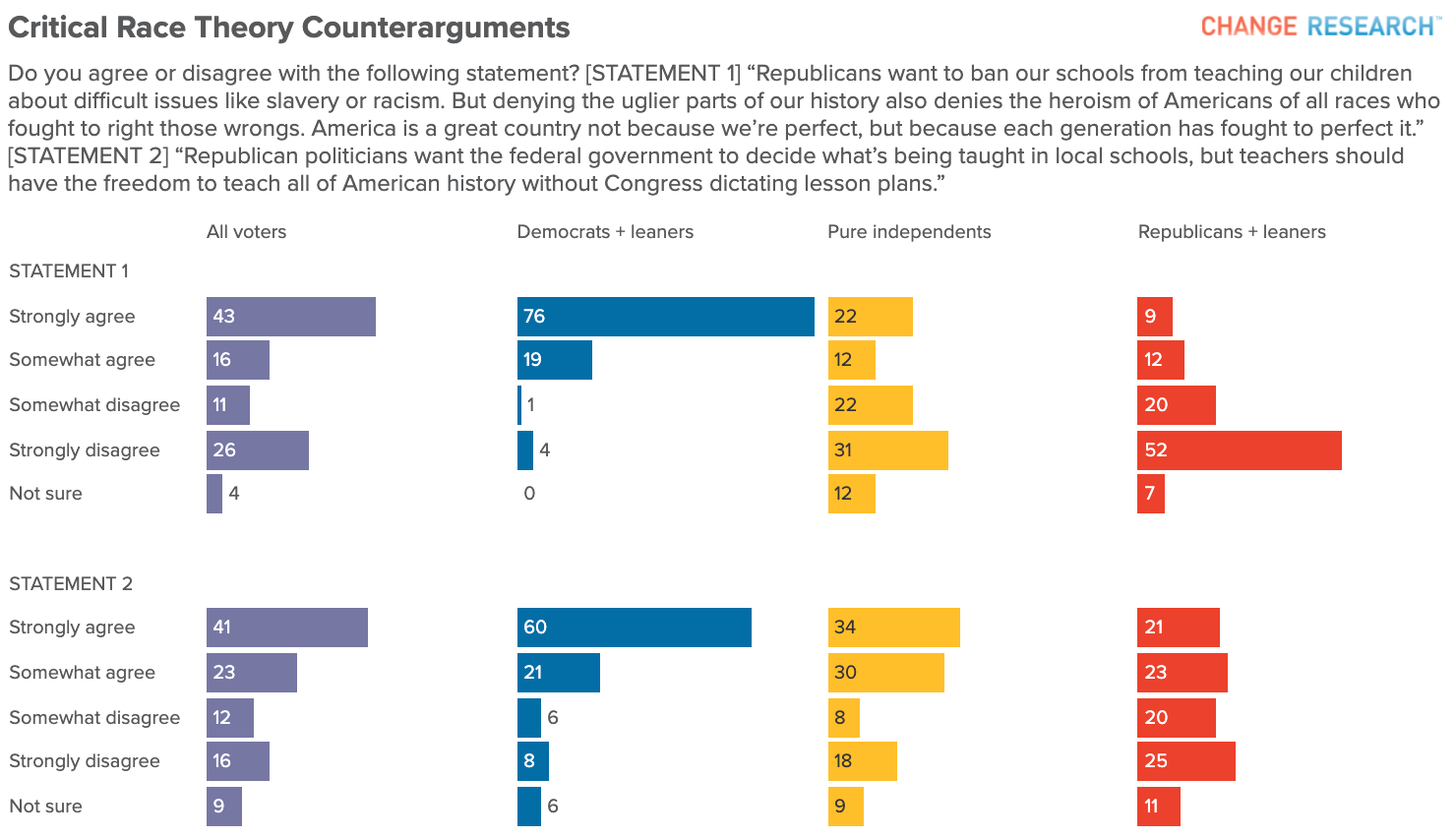 The second message’s success among independents and Republicans suggest it would be a winner for this campaign.

Among all voters, there is little distinction between the various pro-Youngkin and pro-McAuliffe messages: they’re all rated as convincing to the vast majority of those already planning to support each candidate, and unconvincing to nearly everyone who plans to vote against them.

But two messages stand out among undecided voters: McAuliffe’s plan to rebuild the economy and reduce income inequality, and Youngkin’s pledge never to allow critical race theory to be taught in Virginia’s schools.

The two anti-Youngkin messages that best persuade undecided voters both make the same point: that Youngkin will take care of himself and his wealthy friends at the expense of Virginian families. The one which uses his work at Carlyle as a frame is more effective with all voters than the other, which mentions Youngkin’s comment about the American Rescue Plan being “unnecessary.”

The other anti-Youngkin messages—about his connections to Trump, his comments about his true views on abortion, and his support for the Big Lie claiming Trump actually won the 2020 election—are convincing to a majority of voters. So while they may not be the most effective messages, they can likely be used in targeted settings without alienating many voters. 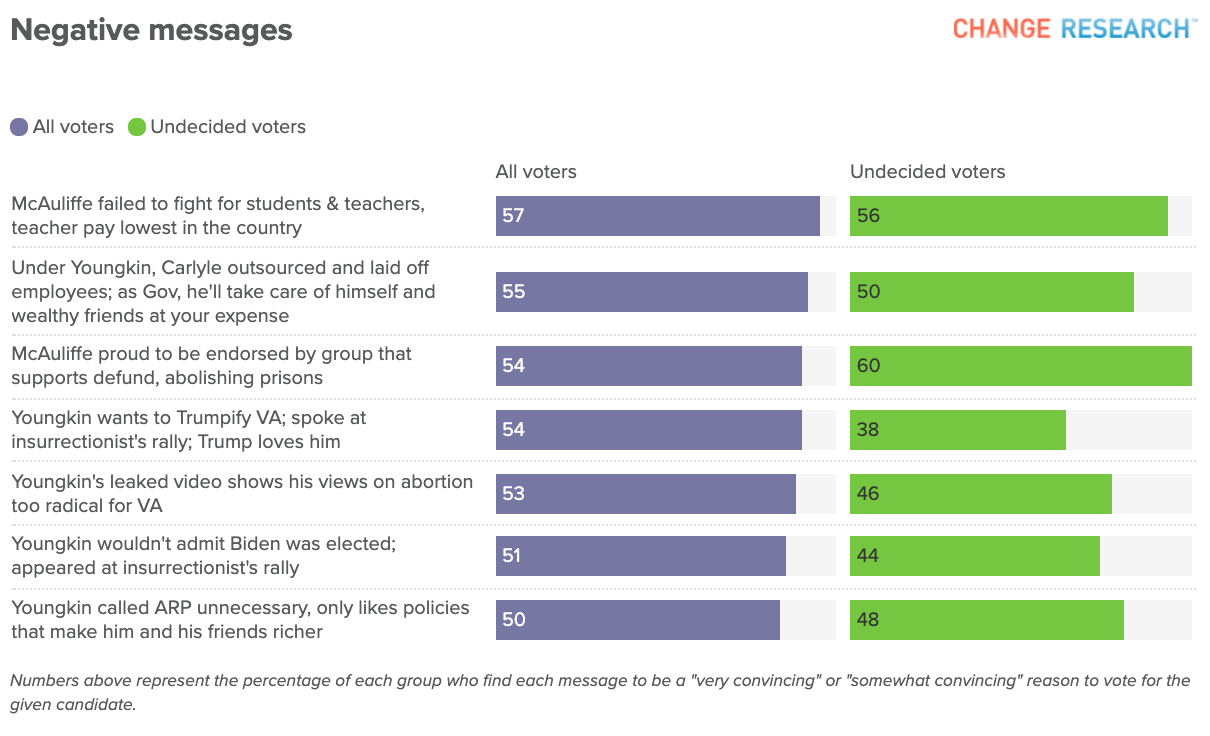 Meanwhile, McAuliffe has large vulnerabilities on both education and endorsements he’s received from groups that support defunding the police. The counterarguments to both are fairly simple, but it is important for McAuliffe to make them clearly and frequently.