The Families and Jobs Plans Are Overwhelmingly Popular

Democrats in Congress are currently advancing what could be one of the most ambitious economic investments in U.S. history. If passed, the American Families Plan and American Jobs Plan would create millions of jobs, rebuild our country’s infrastructure, and provide urgently needed economic relief to families across the nation.

In a May 2021 survey, Data for Progress and Vote Save America tested the popularity of the American Families Plan and American Jobs Plan, as well as various messages to gauge which frames voters find most persuasive. We find that across every framing we tested, both plans enjoy strong support—including among a clear majority of independents and a substantial number of Republicans. 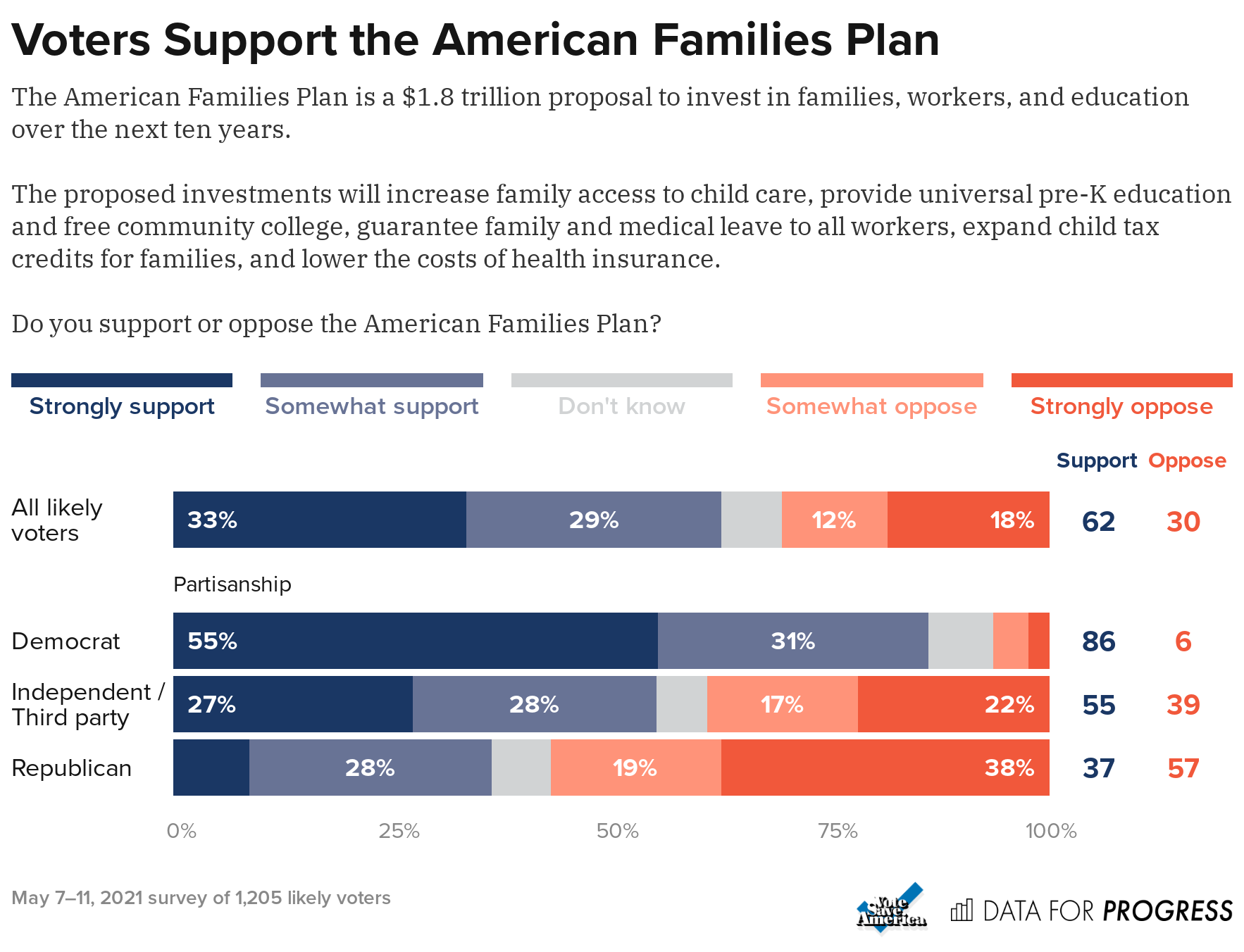 We next asked likely voters to select which three of the main, individual components of the American Families Plan they think are the most important to include in a bill passed by Congress. We find that the top-three components of the American Families Plan that voters think are important to include in a final bill are: lowering the cost of health-care premiums, lowering the cost of prescription drugs, and reforming corporate taxes. Notably, this is consistent across parties. Democrats, independents, and Republicans all prioritize health-care reforms included in the American Families Plan, as well as reforms to corporate taxes that would remove loopholes and ensure corporations pay their fair share. 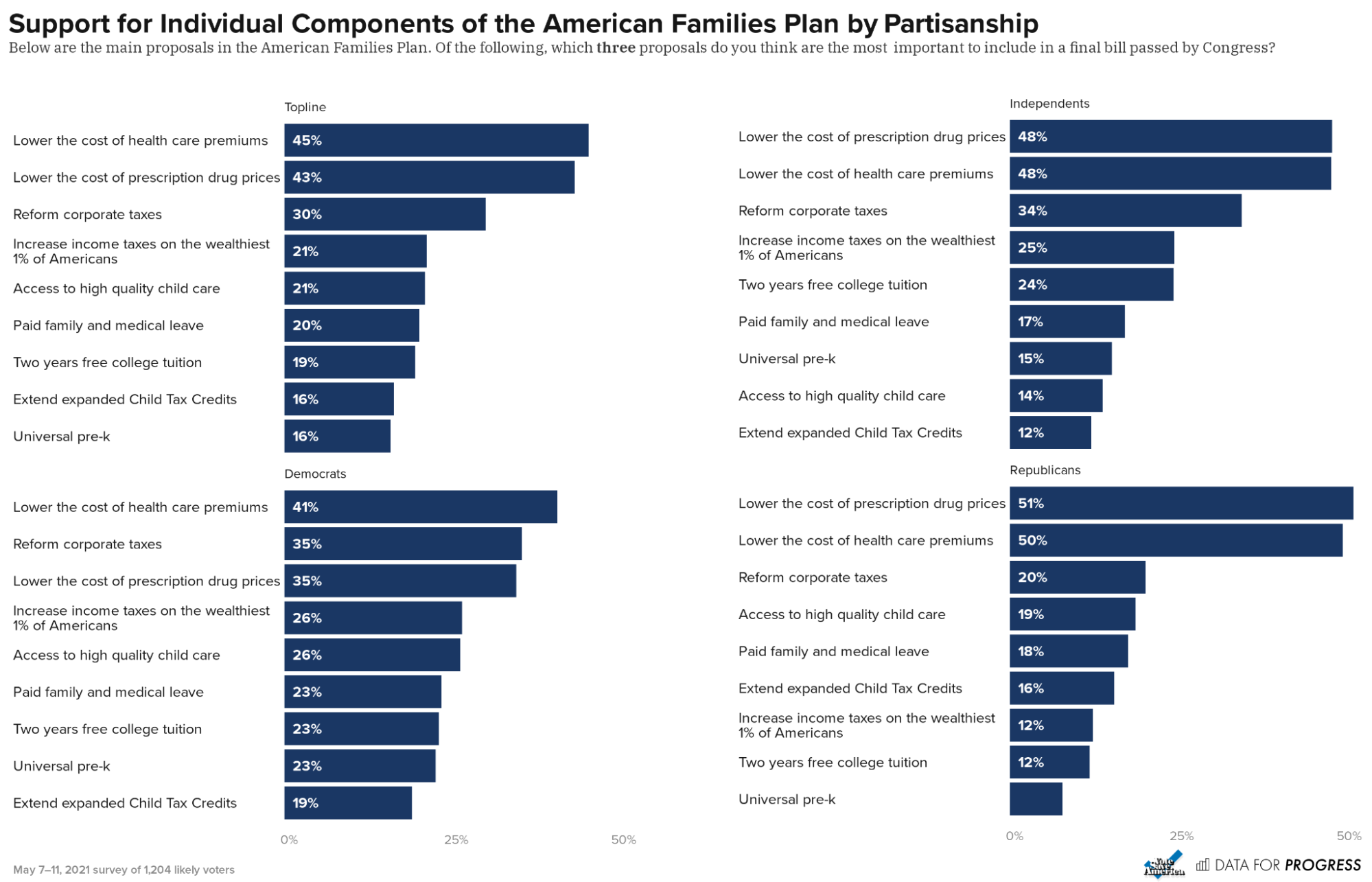 Next, we tested three different ways that Democrats and President Biden have talked about the American Families Plan and Biden’s agenda more broadly. While Biden has consistently talked about “building back better” throughout his campaign, he has also emphasized the need for national competitiveness, most recently in his first address to Congress. To test these frames, we split our sample into three different groups. All respondents saw the following oppositional frame to the plan that Republicans have typically drawn on:

Opponents of the proposal say that right now we need to reduce our national deficit and leave these policy decisions to the states, instead of pursuing unnecessary spending and tax increases right after a pandemic.

We varied the following frames in support of the plan:

Build Back Better: Supporters of the proposal say that these are much needed investments to fully recover from the pandemic, and to build a stronger economy that does not leave any worker or family behind.

National Competitiveness: Supporters of the proposal say that these are much needed investments not only to fully recover from the pandemic, but to out-compete other countries around the world and win the 21st century.

Care Economy: Supporters of the proposal say that to build a stronger economy, we need to invest in our workers, families, and caretakers — through child care and paid family leave — just like we invest in our nation’s roads and bridges.

The American Families Plan remains popular among voters across the three different statements in support of the plan. The building back better theme, however, performs better in reducing opposition: voters support the plan with a build-back-better frame by a 34 point margin, compared with a 25-point margin of support for both a national competitiveness frame and a care economy frame.

We find the effectiveness of frames varies by partisanship. While the plan continues to be overwhelmingly popular among Democrats, the frame that garners the highest level of support among them is one of national competitiveness—which President Biden specifically emphasized in his address to Congress. This frame results in higher support for the plan among Democrats by seven points compared to building back better, and by eight points compared to the care economy frame. In contrast, independents are more aligned with our topline results, where likely independent voters support the plan under a build-back-better frame by a 30 point margin. Independents are largely split on support after seeing a care economy frame, while a national competitiveness frame results in opposition to the plan by an 11-point margin. Interestingly, we find the highest level of opposition among Republicans under a national-competitiveness frame as well. 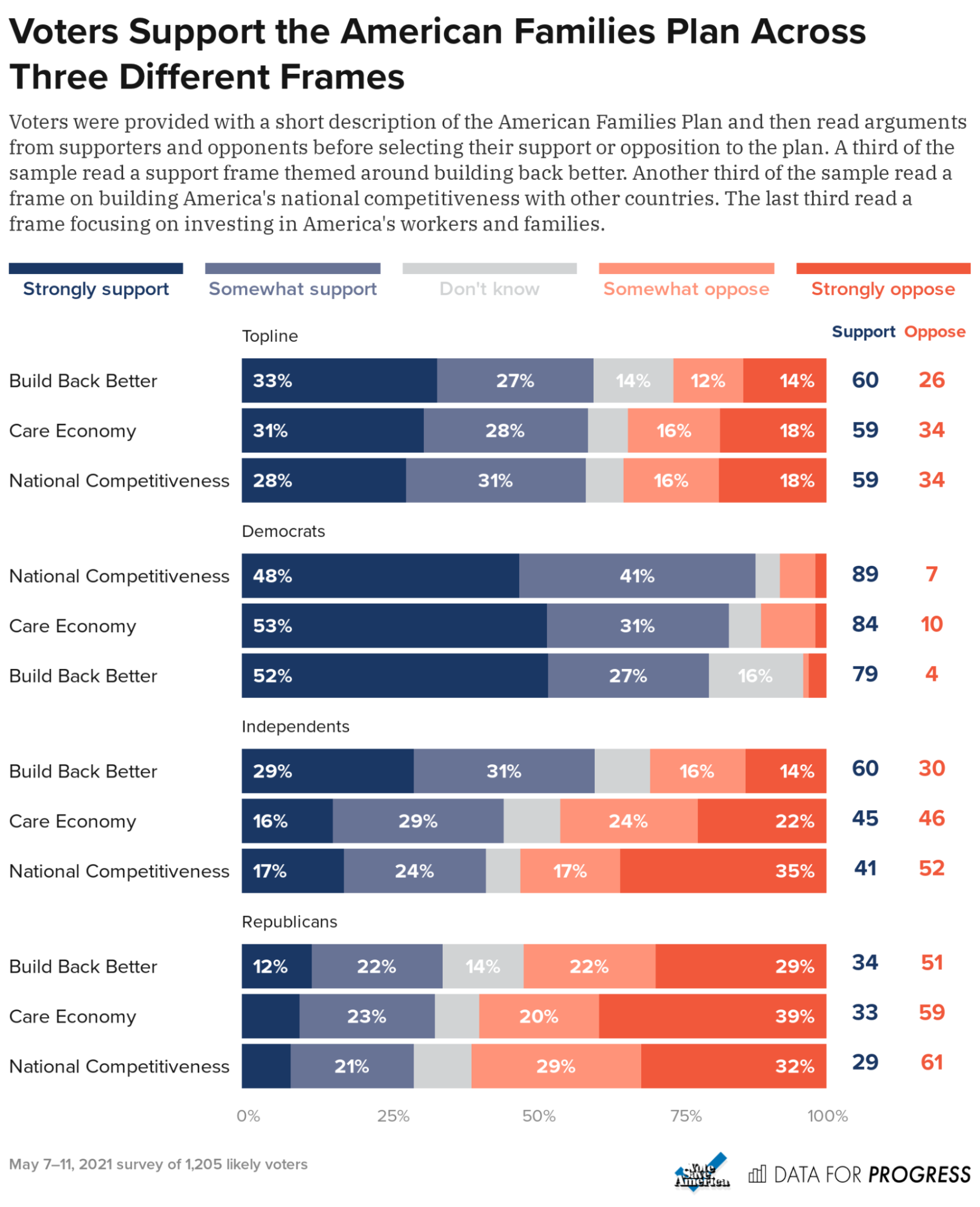 Voters who saw the jobs frame read the following:

The American Jobs Plan is a $2.25 trillion proposal to invest in the nation’s infrastructure and workforce. The proposed investments will create good-paying jobs to modernize America’s energy sector, increase wages and benefits for caregiving jobs, revitalize American manufacturing to spur innovation and job creation, and invest in workforce development programs in high demand sectors.

Voters who saw the infrastructure frame read the following: 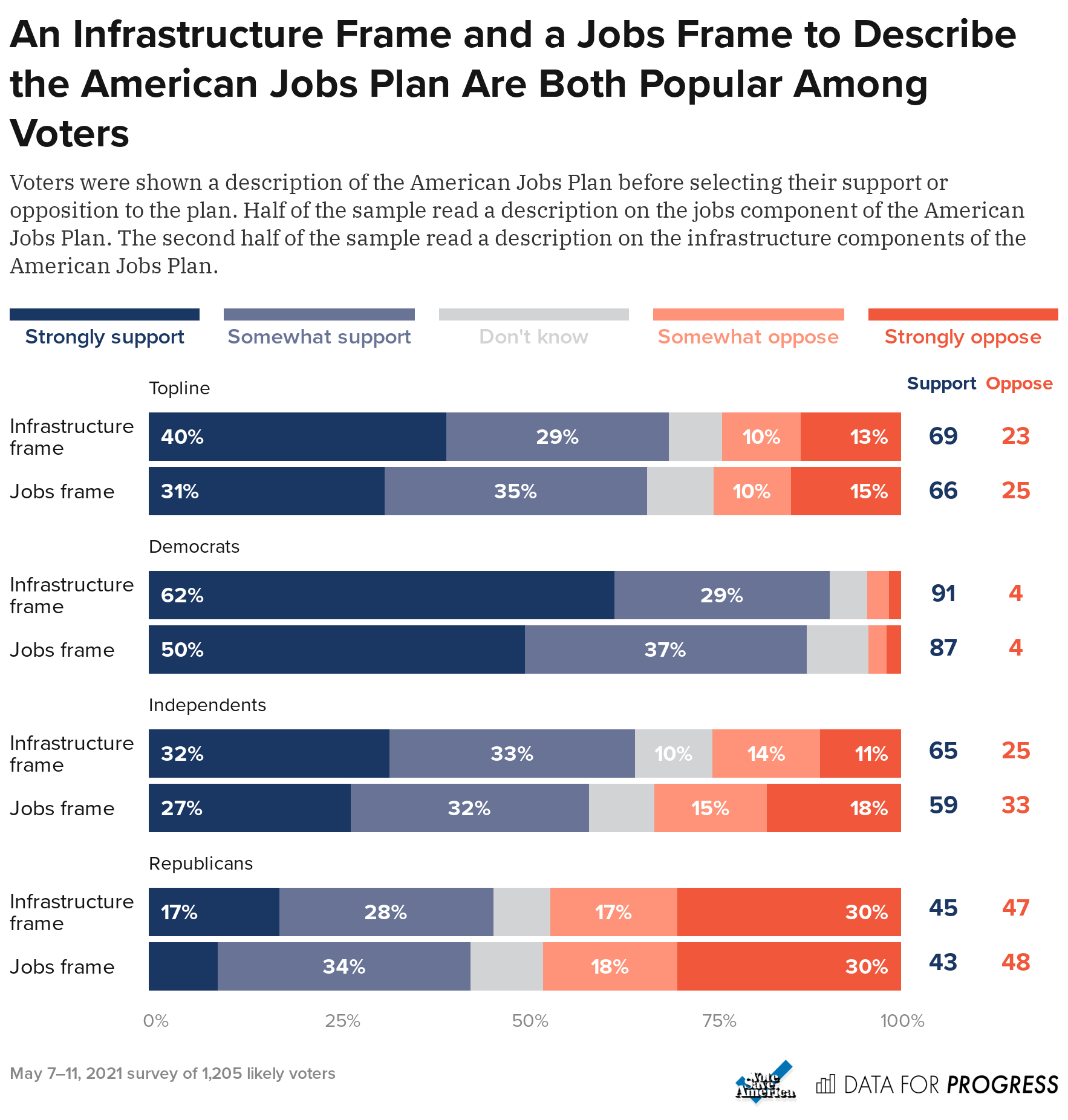 We next examined voter support for individual components of the American Jobs Plan. Again, likely voters selected the three proposals they think are the most important to include in a final congressional bill. Among likely voters, the top three proposals include physical infrastructure investments such as repairing roads, bridges, and drinking-water systems, as well as upgrades to modernize our power grid to be energy efficient and resilient to extreme weather. We find that Democrats and independents are in agreement on these three particular investments. While Republicans also favor including physical infrastructure repairs in a final bill, expanding access to care services and benefits for care workers is also notably among their top three proposals.

Lastly, we examined voter support specifically towards investments for healthcare and caregiving in the American Jobs Plan. Democrats and Republicans in Congress have been particularly polarized on these aspects of the American Jobs Plan, with Republicans arguing that an infrastructure bill should only prioritize investments in physical infrastructure like roads and bridges. We then posed this exact argument by Republicans against Democratic arguments that we need to make sure the eldely and people with disabilities have access to health care, and additionally that these investments will provide long-needed benefits for caregiving workers. We find that after reading arguments from both parties, likely voters support including $400 billion for healthcare and caregiving services in the American Jobs Plan by a 32-point margin. In addition to having enthusiastic Democratic likely voter support by an 80-point margin, a majority of Independent likely voters also support this specific investment in healthcare and caregiving services by a 17 point margin. 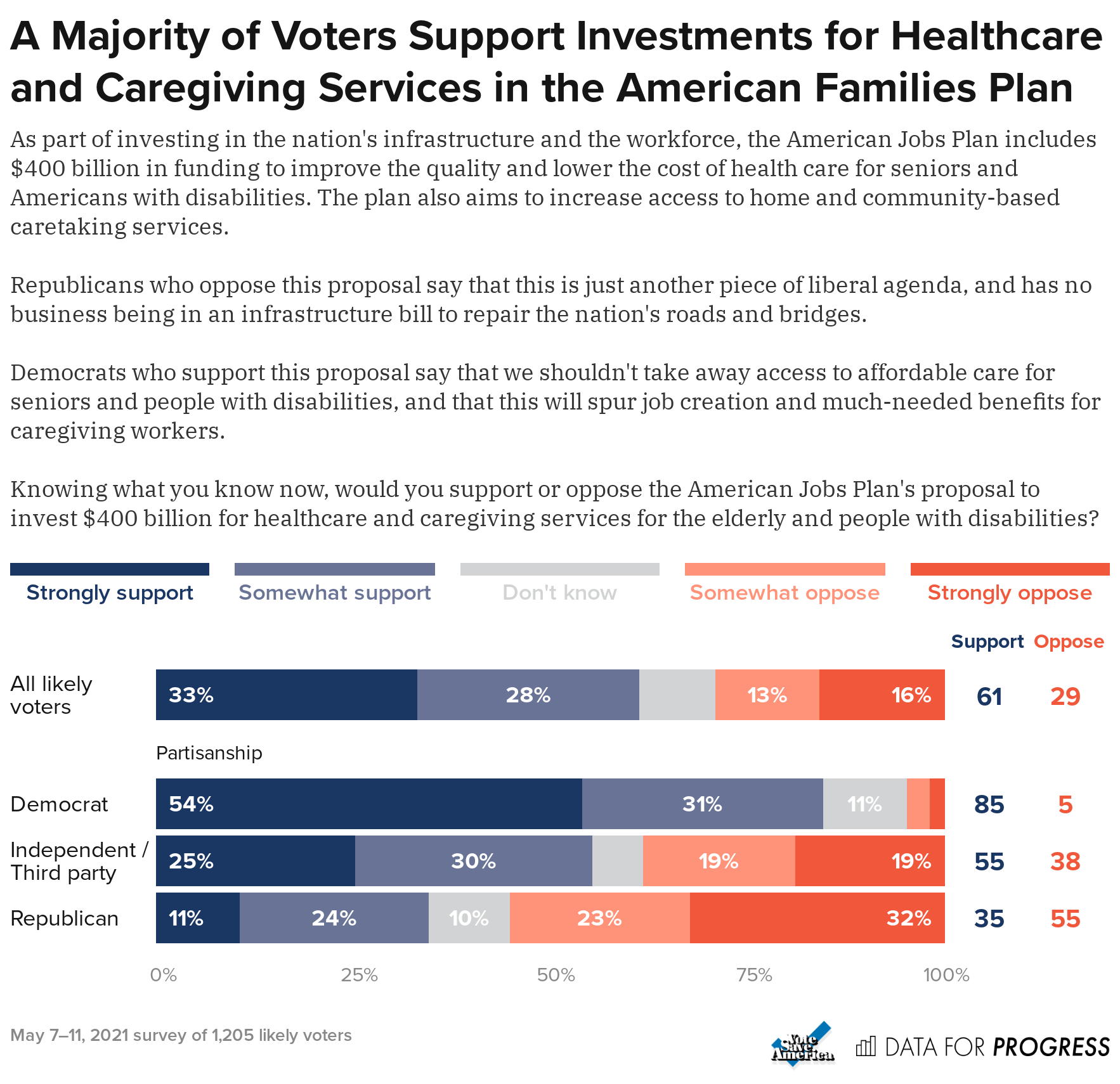 Our polling shows that the American Families Plan and the American Jobs Plan are broadly popular among voters. We also find that voters—importantly, across parties—view lowered costs of health care, corporate tax reforms, physical-infrastructure repairs, and care services as the most important parts of both plans. An effective way for Democrats to bolster support for Biden’s agenda would likely center on the need to build a stronger economy and stronger infrastructure as we recover from the effects of the pandemic. However, regardless of frame, voters broadly support the vitally needed investments that President Biden has proposed, from repairing our roads and highways to supporting American workers, caregivers, and families.

From May 7 to 11, 2021, Data for Progress conducted a survey of 1,205 likely voters nationally using web panel respondents. The sample was weighted to be representative of likely voters by age, gender, education, race, and voting history. The survey was conducted in English. The margin of error is ±3 percentage points.

Toplines can be found here.

Evangel Penumaka is a polling analyst at Data for Progress.

Lew Blank is a senior writer at Data for Progress.