Congress: Oppose the American Jobs Plan At Your Own Risk

The American flag flutters in the wind as work is done on the roof of a building under construction in Sacramento, Calif., Tuesday, March 31, 2020. While most Californian's have spent more than a week under a mandatory stay-at-home order, because of the coronavirus, construction work is among the jobs exempt as part of the "essential infrastructure." (AP Photo/Rich Pedroncelli)

The American flag flutters in the wind as work is done on the roof of a building under construction in Sacramento, Calif., Tuesday, March 31, 2020. While most Californian's have spent more than a week under a mandatory stay-at-home order, because of the coronavirus, construction work is among the jobs exempt as part of the "essential infrastructure." (AP Photo/Rich Pedroncelli)
Written By Pete Maysmith, Sean McElwee

While the Washington, DC, crowd is consumed with infighting over who in the Republican Party is loyal to Donald Trump, the majority of voters—from Liz Cheney’s Wyoming constituents to the New Yorkers represented by Elise Stefanik—just want to see the government invest in their future. And the future runs on clean energy.

The League of Conservation Voters and Data for Progress’s new survey on the American Jobs Plan reaffirmed the overwhelming popularity of President Biden’s plan to invest $2.3 trillion to create millions of new, good-paying union jobs that will modernize America’s infrastructure and help us transition  to an equitable clean-energy future. Seventy-one percent of all likely voters in the U.S. support the plan—and when we used advanced modeling techniques to gauge support in even deep red congressional districts, we still found support over 60 percent. 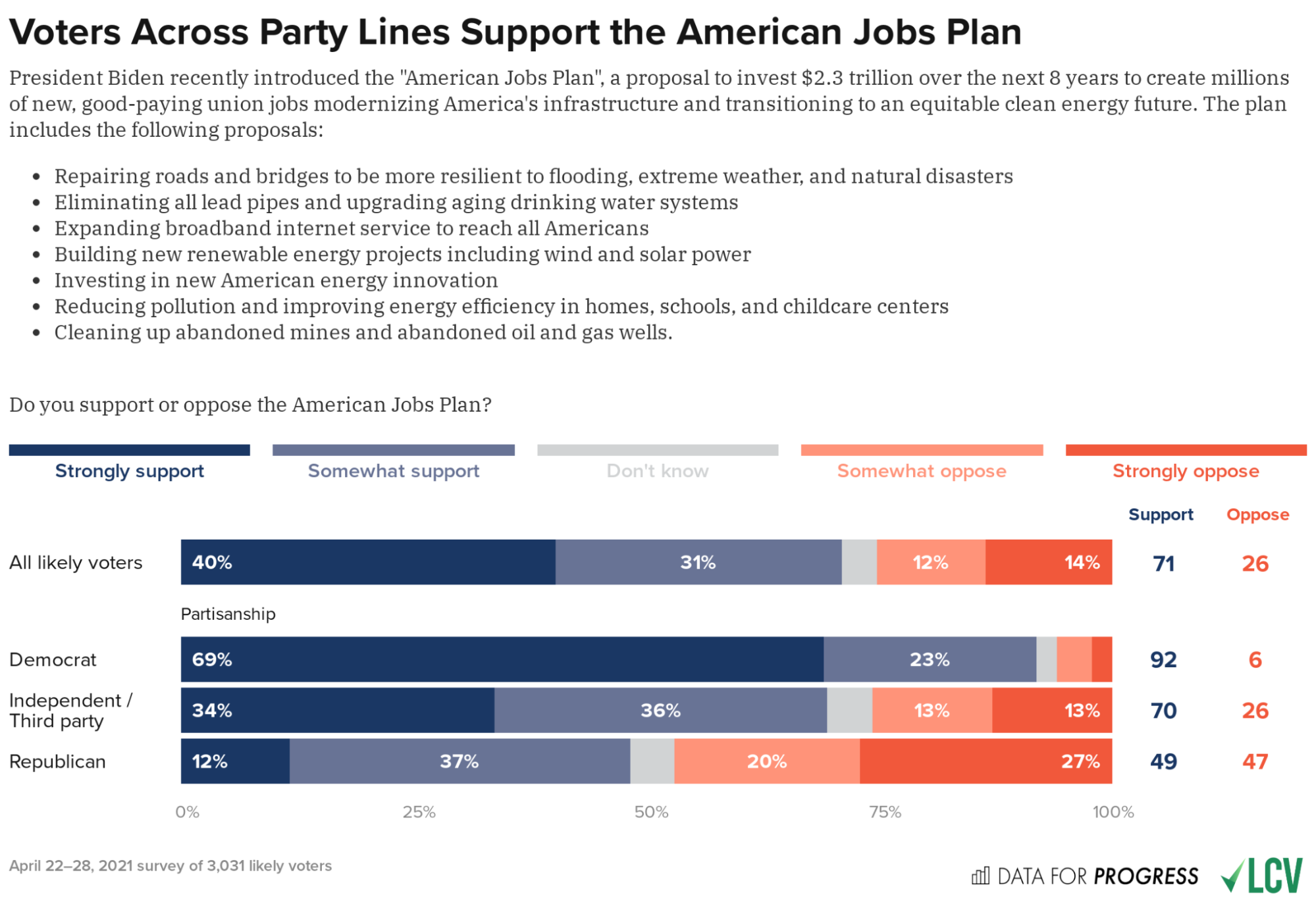 As our nation begins the transition from rescue to recovery, voters are looking for equitable solutions that will not only get the U.S. back on track, but build us back better than before. From eliminating all lead drinking-water pipes to expanding clean-energy tax credits, voters back federal investments to create good-paying jobs, tackle the climate crisis, and address environmental injustices. In fact, our modeling shows that three out of four people in each district or state support the American Jobs Plan, clean energy, and climate action.

In the key battleground state of Arizona, for example, 79 percent of voters across the state support the American Jobs Plan, 72 percent support ensuring the benefits of climate and clean-energy investments go to the communities long exploited by polluters, and 78 percent think it’s important that Congress takes action to address climate change. In Arizona’s first congressional district, one of the most politically competitive in the state, 80 percent of voters support the American Jobs Plan.

Across 11 swing Congressional districts*, support for the plan averages 78 percent and in the swing Senate states of Arizona, Georgia, Pennsylvania, New Hampshire, Nevada, North Carolina, and Wisconsin, an average of 80 percent of registered voters support the government making investments to create good-paying jobs in clean energy. Even in Marjorie Taylor-Greene’s very Republican Georgia district, 66 percent of voters support investing at least $2 trillion dollars to create good-paying jobs in the clean-energy economy while tackling climate change and environmental racism because it is the right thing to do for people and the planet.

The data clearly shows that the climate and clean-energy investments in the American Jobs Plan have bipartisan support among voters. It’s disappointing to see that Senate Republicans’ infrastructure proposals put the special interests of big polluters first and leave out the clean-energy investments required to propel our nation forward. Given strong bipartisan support for these provisions, you have to follow the money trail: The oil and gas industry gave over $62 million to Republican candidates in the 2020 cycle alone.

Along with voters, the American Jobs Plan has the backing of labor unions, environmental organizations, environmental-justice leaders, businesses, and local leaders from across the country—it’s not just good policy, it’s good politics. The facts are indisputable: the American Jobs Plan meets the scale of the crises we face. In the eyes of voters, building back better means we must put clean energy, justice, and high-quality jobs at the center of our recovery.

When it comes to the climate crisis, time is not on our side. We are counting on Congress to seize this once-in-a-generation opportunity and pass President Biden’s transformational American Jobs Plan plan. And as lawmakers debate the size and scope of the legislation, it is clear that voters overwhelmingly support the critical climate and clean-energy provisions of the American Jobs Plan— Congress must include them in the final bill it passes. Standing in the way of progress on climate, clean energy, and environmental justice is simply not an option for any elected official who cares what their constituents think.

Pete Maysmith is the Senior Vice President of Campaigns at the League of Conservation Voters (LCV).

Sean McElwee is a co-founder of Data for Progress.