To: Interested Parties
From: Dan Pfeiffer, Pod Save America
RE: The Work We Need To Do To Win Wisconsin

The latest Crooked Media-Change Research poll takes a look at the pivotal battleground state of Wisconsin. We designed our survey to look less like a media poll that focuses on the horse race, and more like the kind of survey a campaign would use to make strategic decisions.. Our goal was to test various messages for and against Donald Trump, to see what works and what doesn’t, and hopefully provide guidance that Democrats can use in the general election.

Wisconsin was incredibly close in 2016. It was incredibly close in the 2018 governor’s race, and according to the latest Crooked Media-Change Research Pollercoaster survey, it remains very close and polarized today. Wisconsin may very well tip the Electoral College in 2020, and we may not know who won until all the votes in crucial Waukesha County are finally counted.

Our poll found Wisconsin to be essentially tied. A generic Democrat leads Trump 46-45 when we include voters who say they’ll “definitely” or “probably” vote for one candidate or the other. Another three percent percent say they’ll vote for third party candidates, and six percent are undecided.

In a race this close, a few key groups will decide the election:

A caveat: horse race polls this early are informative but not particularly indicative of what will happen in 2020. In the summer of 2011, the USA Today/Gallup poll had Barack Obama losing to a generic Republican by eight points. No one should overreact to any one poll—good or bad.

Still, horse race numbers aside, this poll does highlight Trump’s advantages in Wisconsin, his weaknesses, and the messages that may be most effective for defeating him in 2020.

Trump is much more popular in Wisconsin than he is nationally. As of this writing, Trump’s national approval rating in the FiveThirtyEight polling average is 41.9-53.3 percent. According to our poll, his approval in Wisconsin is 48-51 percent.

We also tested a number of Trump’s campaign messages to see if hearing them made voters more or less likely to support him.  Most of the messages we tested in this poll did very little to move the needle in Trump’s favor, but the following economic messages made voters 18 points more likely to vote for Trump:

“Since Trump became President, we’ve created millions of jobs and unemployment rates are the lowest they’ve been in decades.”

Trump’s economic strength in 2019 is an improvement on his standing in 2016. According to exit polls, Hillary Clinton won voters in Wisconsin who cited the economy as their top issue by 11 points.

Anyone who thinks Donald Trump will be easy to beat in Wisconsin is sorely mistaken, and the path to the White House for a Democrat gets very narrow without Wisconsin.

Despite Trump’s (relatively) strong political standing in Wisconsin, our poll reveals a path to defeating him in 2020.

We tested Trump’s positive message against positive Democratic messages on immigration, health care, climate change, the economy, and other issues. The Democratic message usually prevailed in these head-to-heads, but none moved the horse race by more than a few points.

However, our poll also revealed that despite Trump’s dominance of the news the last few years, Wisconsin voters are very unfamiliar with much of his record. Some negative stories—the Russia investigation, his tweets, and even his plan to repeal the Affordable Care Act—have already broken through, and thus don’t move voters away from him in a significant way.

Democrats can thus make gains by:

1. Eroding Trump’s strength on the economy;

2. Hitting him on Medicare cuts;

3. Hitting him on his failure to drain the swamp;

Up until now, Trump has benefited from good headlines about a strong economy and a low unemployment rate, but our poll indicates that Wisconsin voters know very little about his economic record. In fact, when voters learn about the impacts of his actual policies they are less likely to support him by large numbers. Contrary to conventional wisdom, Trump is particularly vulnerable to attacks on the ineffectiveness and hypocrisy of his trade policy. 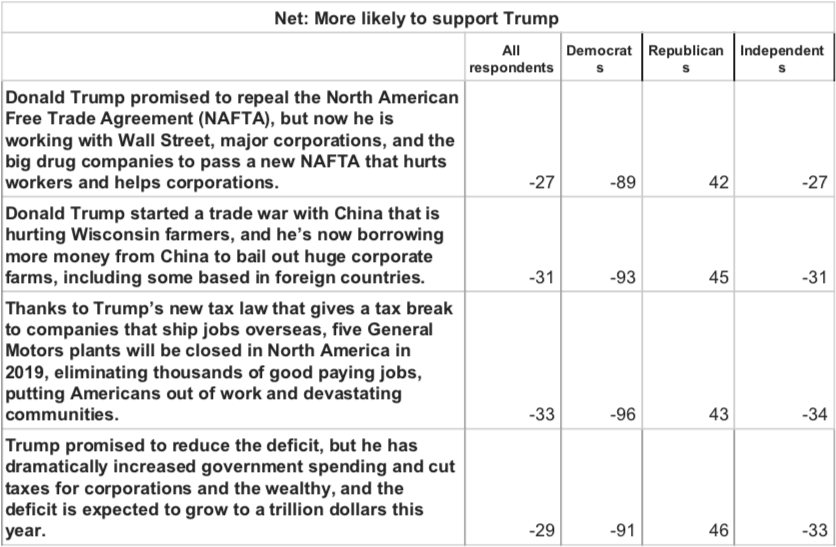 The fact that Trump is leading among independents in our poll by two points overall makes the independent numbers in this chart even more devastating.

Keep Trump’s hands off of our Medicare

The prevailing media narrative is that Democrats are committing political suicide by supporting various Medicare for All plans. Our poll shows that Donald Trump is the one who should be scared of a debate over Medicare in the 2020 campaign. Wisconsin voters are horrified to learn that Trump “proposed nearly $1 trillion in cuts to Medicare to pay for a tax cut that overwhelmingly benefits billionaires and big corporations.”

Getting rich from the swamp

Central to Trump’s appeal in 2016 was his image as an outsider who would drain the swamp and change Washington. Exit polls asked Wisconsin voters which candidate quality mattered most to them, and 44 percent chose “can bring change”—more than twice any other quality. Trump won 84 percent of those voters. Three years later, not only has he failed to drain the swamp, he has presided over an epidemic of corruption, and enriched himself in the process. The poll asked voters whether they agreed or disagreed with the statement that “Trump drained the swamp.” Only 33 percent agreed, and 66 percent of independents disagreed with it.

A message about Trump personally profiting from continued corruption in Washington was also very effective:

This poll contains important clues about how to run against Trump in Wisconsin, but they’re only clues for now. For a clearer sense of what will work, we’d need to test multiple variations of all of these messages and, ultimately, the effectiveness of Trump’s response to the attacks.

However, we can already point to several initial conclusions and recommendations for those waging the campaign against Trump in Wisconsin.

1. Trump’s control of the media environment is very real and the bulk of negative information that would affect the race has not broken through to the voters who need to see it.

2. Nothing in the last few years suggests Democrats will be able to deliver these messages to voters through the press—the only way to do it is with a sustained, targeted, digital-advertising campaign.

3. Even though these messages led large numbers of voters to question their support of Trump, hearing them once barely moved the horse race, which is why we recommend that an aggressive advertising campaign start yesterday.

4. Traditionally, the voters we need to target are paying less attention to politics than those who are already committed to a party, which means it will take time to reach and persuade them.

5. Voters are more likely to be persuaded by contrast messages when they are specific, fact-based, and stripped of the rhetoric that dominates political discourse. In other words, we should look for ways to connect voters with information they wouldn’t otherwise see in as straightforward a way as possible, without added spin. One potential tactic would be using paid promotion to show voters news articles from trustworthy or neutral sources that reinforce particular messages.