Wisconsin plays a crucial role in the Democrats’ strategy to take back the White House in 2020. That’s why the latest poll in our PollerCoaster 2020 series with Change Research is designed to survey Wisconsin voters in a way that a campaign would in order to develop their strategy to win the state. We tested descriptions of Trump, messages on Trump’s positions and Democratic issues, and more to see exactly what might influence the votes of Democrats, Independents, and Republicans in this important state. Here are the top takeaways from our survey of Wisconsin general election voters from August 9 to August 11, 2019. Thanks to Ben Greenfield of Change Research for his support in developing this analysis.

You can dig into the full poll results here: toplines | crosstabs

Who are the up-for-grabs voters?

Swamp not drained. We tested a series of positive and negative descriptions of Donald Trump. As you can see in the below chart, between 47-53% agree with every description, except one: “Trump drained the swamp,” which only 33% agreed with, while 66% of independents and even 27% of Republicans disagreed. 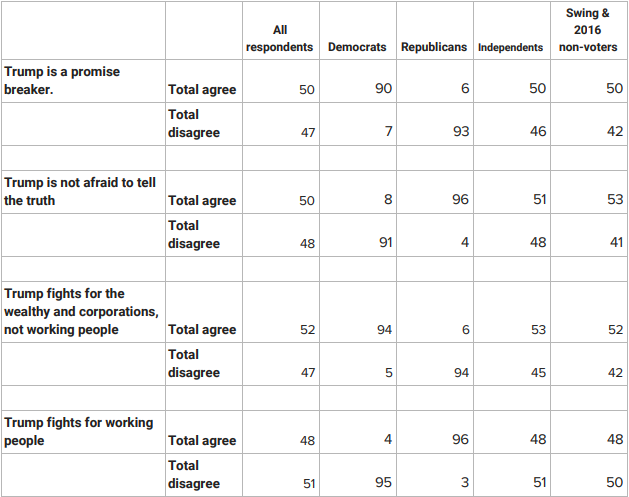 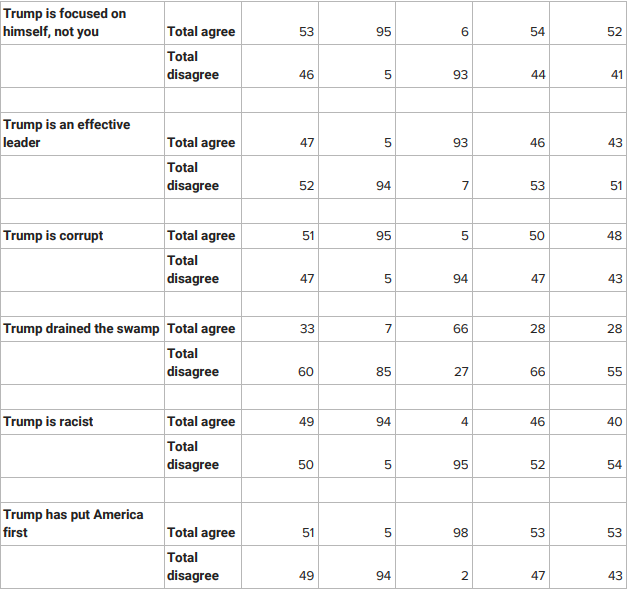 Most voters believe that Trump is a corrupt, ineffective leader who only fights for himself and his rich friends. The statements about Trump where the largest majorities of all voters and independent voters agreed were “Trump is corrupt,” “Trump is focused on himself, not you,” “Trump fights for the wealthy and corporations, not working people,” and “Trump is an ineffective leader.”

Messages about Trump as a phony populist who’s governed as a plutocrat are the most effective. We tested a series of positive and negative messages about Donald Trump, and overall the anti-Trump messages were more persuasive. The most persuasive message tied Trump’s proposed Medicare cuts to his tax cut for the rich, but several messages were close behind: Trump using his office to enrich himself and his family business, Trump’s failed trade war with China, and Trump’s record on outsourcing. There was also one non-economic message that was very effective: a reminder that Trump has been credibly accused of sexual assault by more than a dozen women.

Trump’s most effective message is on jobs. The most effective pro-Trump message, which found some support from Democrats as well as independents, was on job creation and unemployment. That said, independents were also somewhat swayed by his message about the wall and immigration.

Wisconsin voters prefer a public option, support gun safety, and oppose reparations. Across a range of issues, we tested various Democratic messages and policies against a single Republican message: