To: Interested Parties
From: Dan Pfeiffer
RE: Arizona is Winnable

The latest Crooked Media-Change Research poll takes a look at the pivotal battleground state of Arizona.  Like August’s poll of Wisconsin, we designed our survey to look less like a media poll that focuses on the horse race, and more like the kind of survey a campaign would use to make strategic decisions.

For years, Arizona has been on the Democratic Party’s wish list. In 2008, the Obama campaign contemplated investing resources down the stretch. In 2016, Hillary Clinton (in)famously campaigned in Arizona the week before the election, but ultimately lost to Trump there by 3.5 points.

A lot has changed since then.

Arizona is now clearly a battleground state. A generic Democrat leads Trump 47-46 when we include voters who say they will “definitely” or “probably” vote. Two percent plan to vote for a third-party candidate and five percent are undecided.

The shift in the state is based on three factors:

Before we load up the confetti cannon, Trump remains very strong. Trump is more popular in Arizona (48 percent approval) than nationally (41.5 percent, according to FiveThirtyEight). Trump’s relatively high approval in Arizona is particularly notable because we conducted the poll amid the height of the Ukraine scandal.

The economy is both Trump’s greatest strength and weakness. Despite trade wars and recession fears, Trump’s economic approval rating in Arizona is a robust 50-48.

We tested a number of positive Trump messages about immigration and the courts. Most had little to no impact on the race. However, Trump’s positive economic message about job creation was very effective at moving the race in his direction.

Much as we found in last month’s poll of Wisconsin, however, Trump’s economic support is a mile wide and an inch deep. Voters know the highlights about the unemployment rate, but they know little else. Showing them information about Trump’s policies and their effect on people is devastating for him. 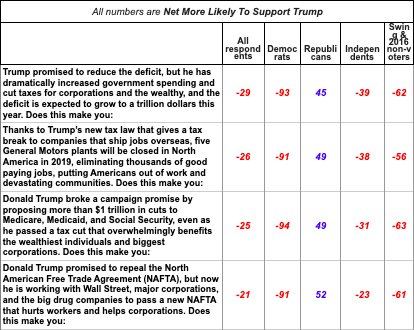 Trump is so manifestly unfit in so many different ways that figuring out a clear and consistent contrast message is hard. In 2016, the Democrats painted Trump as a racist, a misogynist, unfit, uncouth, a con artist, a liar, and a plutocrat. All of these messages are accurate, but when used interchangeably they can leave voters confused.

One of the goals of this poll was to get insight into which arguments against Trump were most believable. The poll asked voters whether they agreed or disagreed with four statements about Trump. The good news is that it is very easy to convince voters that Trump is bad. All four statements tested very well, but two stood out: 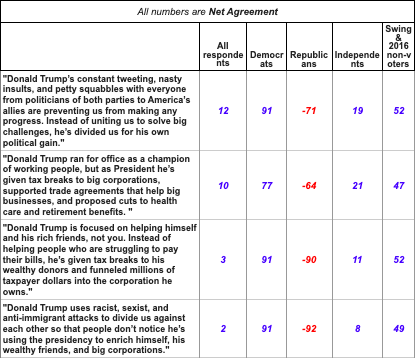 The statements about Trump’s chaotic leadership style and his faux populism are clear winners.  They work with independents, swing voters and non-voters. They are also the only negative messages that we have tested that have any traction with Republicans.

We’d need more testing and refinement to determine exactly how to use this information to drive a permanent wedge between these voters and Trump, but the findings are very promising.

Trump Should Be Worried About Impeachment

While it seems unlikely that the Senate will remove Trump from office, the political danger for Trump in the Ukraine scandal is very real. The poll found support for an impeachment inquiry unsurprisingly split on party lines. But that’s not Trump’s problem.

As noted above, Trump’s Twitter tantrums and petty fights are problematic for a lot of voters. His conduct over the last 10 days has likely made his political situation much worse. If it continues, the damage could be permanent.

This is just one poll, and much more research is necessary to develop a strategy, but we can draw some initial conclusions:

1. Arizona is very winnable, but it will require a significant early investment. The path to victory is perhaps more difficult than in more traditional battlegrounds like Wisconsin. There is no path to victory without high turnout among people who didn’t vote in 2016. These voters support a generic Democrat 69-16. This group is disproportionately young—68 percent of them are under 35. Turning out these less frequent and first-time voters will take time and resources.

2. A consistent narrative of Trump as a chaotic corporatist who divides America in order to help big business and his wealthy friends is the foundation for the campaign against Trump—the rest is a distraction from what matters to voters. Connecting the chaos to specific problems that aren’t being solved is key. This isn’t about decorum or what is “presidential,” it’s about results for American families—specifically the ones Trump promised to fight for and then abandoned.

3. Whoever wins the economic debate wins the state (and likely the White House). Trump has a very strong argument for himself, but he is quite vulnerable if—and only if—voters learn about his policies that help the wealthy and corporations. The effort to educate voters should begin as soon as possible. We cannot expect events on the ground to take care of the task for us. There is no higher priority for Democratic and progressive groups than a concerted, well-funded effort to change perceptions of Trump’s economic record. All of the necessary information is there, but we need to put it front of voters relentlessly over the next 13 months.

They Have A Plan

The plan: manufacture as much propaganda for Trump’s campaign as possible ahead of the election, then use police power and the justice system to overturn or call into question the will of the people.

In the fight to stop Trump, Democrats have put all their egg in a single basket in the hope the most volatile and crooked president in American history doesn’t knock it over.

The stakes are too high in this election to litmus tests allies, but the attention the Lincoln Project has received doesn’t match its actual impact.

Democrats should say no to any further coronavirus legislation that doesn’t provide as much running room to Joe Biden as it will provide to President Trump.

Donald Trump Has A Secret Plan to Win (Seriously)

After what happened in 2016, it would be foolish to assume that Trump can’t rebound from his abysmal position and stumble into a second term.