Whom did we poll? 3070 likely Michigan voters, including a large number of swing voters, between May 11-17.

Who are the swing voters?

Don’t forget Gary. Sen. Gary Peters (D-MI) leads Republican John James 48-43%. This race can’t be taken for granted, though: the wider margin is partly due to more Republicans than Democrats being undecided, which may be a function of name recognition. A negative sign for Peters: he only leads 68-13% among those who lean towards voting for Biden. A positive sign: he’s only down 10% among Trump-Whitmer voters, while Biden is down 42% with these voters.

Veepstakes! We tested the short list of vice presidential candidates to determine their effect on the overall race between Biden and Trump, and it was very small. For all but Stacey Abrams, Trump gained between 0.5 and 1.2 points over his initial margin. For Abrams, he gained 3 points. This may have to do with her lower name recognition, though Klobuchar’s name recognition is not much higher than Abrams’s.

Undecided voters trust Biden over Trump on everything but managing the economic recovery and helping small businesses recover. 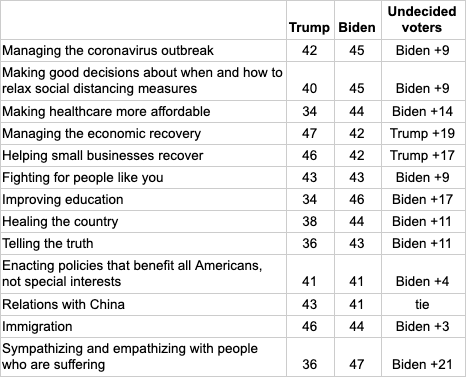 Voters are slightly opposed to protests at the Michigan State Capitol, but opposition is much stronger than support. Around 45% of voters support the protests, while opposition was around 54%. However, strong support is in the low 30s, while strong opposition is in the high 40s. Again, this broke down along partisan lines, but with more Republican opposition than Democratic support.

Voters are slightly more worried about opening up too soon than waiting too long. 48% worry about opening too soon; 43% worry we’ll wait too long. This largely tracks with partisan identity: 87% of Democrats are in the former camp, 82% of Republicans in the latter.

41% say we must take all possible precautions, and that the health of the economy depends on the health of Michiganders. 32% say everyone is making too big a deal of the virus, and that we should return to our normal way of life. The other 27% say we should observe precautions for a little while longer, then reopen.

73% are concerned about budget cuts to children’s programs, including 50% who are very concerned. Even 55% of Republicans are concerned. As we’ll see, this is consistent with the numbers on one of Biden’s best-performing messages.

Voters strongly oppose liability protections for corporations, 37-55%. 21% of Republicans oppose the protections, while just under 10% of Democrats support it. Additionally, opposition is much stronger than support: only 16% strongly support it, while 42% oppose.

Biden’s best messages are about Trump blocking economic relief, focusing on corporations and the wealthy, wasting time on testing, and being weak on China. We asked Michigan voters whether they agree or disagree with a series of messages from Trump and Biden, detailed below. Most of Biden’s best-performing messages fared well both with the entire electorate and with undecided voters. The message about Trump wasting time getting a testing regime up and running was quite effective with undecided voters, but less so with the rest of the electorate.

Trump’s message about China was the best performer overall. The message, detailed below, was the most effective with the entire electorate by a five-point margin. But the message performed almost identically to Biden’s messages on China with undecided voters, suggesting that Biden can play Trump to a draw on the issue. And encouragingly, voters are more receptive to the idea that Ivanka’s dealings with China are corrupt than that Hunter Biden’s were. 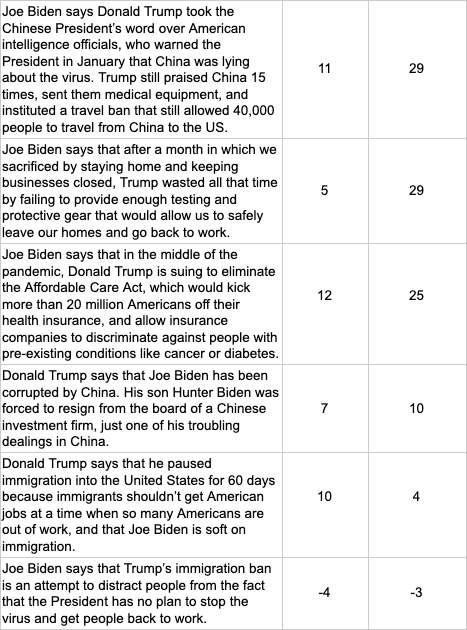 Three criticisms of Trump’s handling of COVID-19 stood out:

1. He’s played politics, sending life-saving equipment to Republicans while denying it to Democrats and telling Vice President Mike Pence to penalize unappreciative Democrats
2. He takes care of the rich and big corporations at the expense of everyone else
3. He downplayed the threat of COVID-19, comparing it to the flu while playing golf and holding rallies.

Our Most Solemn Obligation: Win in November

Resoundingly. Run the table of states in play. Win every possible Senate seat—including long-shots in South Carolina, Iowa, Georgia, and Kentucky. Increase margins in the House.

Here’s a completely scientific, absolutely foolproof guide on how to pick one of our Adopt A State teams.

Donald Trump inherited a strong economy and destroyed it. Here's how Democrats can make sure the public understands this—and why they must.

PollerCoaster 2020: How To Win Michigan

If Democrats can execute an aggressive, disciplined message about Trump’s responsibility for the economic mess, they can put Michigan, and the race for the presidency, away.