This bill is only so large because Democrats didn’t get lured down a different path. In the early stages of negotiation, a group of 10 Republican lawmakers floated a $600 billion relief package. Though President Biden did meet with these Republicans, Democrats in Congress proceeded with their own plan and chose to advance it unilaterally, through the filibuster-proof budget process. But even if we assume all 10 of those Republicans intended to vote for their own counteroffer, Democrats should have no regrets about charting their own path.

In our recent polling, Data for Progress sought to determine which plan is more popular. $1.9 trillion and $600 billion are large numbers and the difference between them is hard to conceptualize. Nevertheless, we presented voters with a direct visual comparison of both plans and found that voters overwhelmingly support a bigger plan that meets the scale of this moment.

In our experiment, we split likely voters into two groups. We asked the first, our control, which plan they preferred, the $1.9 trillion or the $600 billion plan. We showed the other group  our chart, sourced from the Washington Post, which displays how the plans differ. We then asked the second group the same question: Which plan do you prefer? As the chart depicted below illustrates, the Democratic proposal would spend far more on stimulus checks, unemployment insurance, schools, and child care than the Republican proposal—and the GOP plan wouldn’t invest a penny into state and local governments, a child tax-credit expansion, or rental assistance. 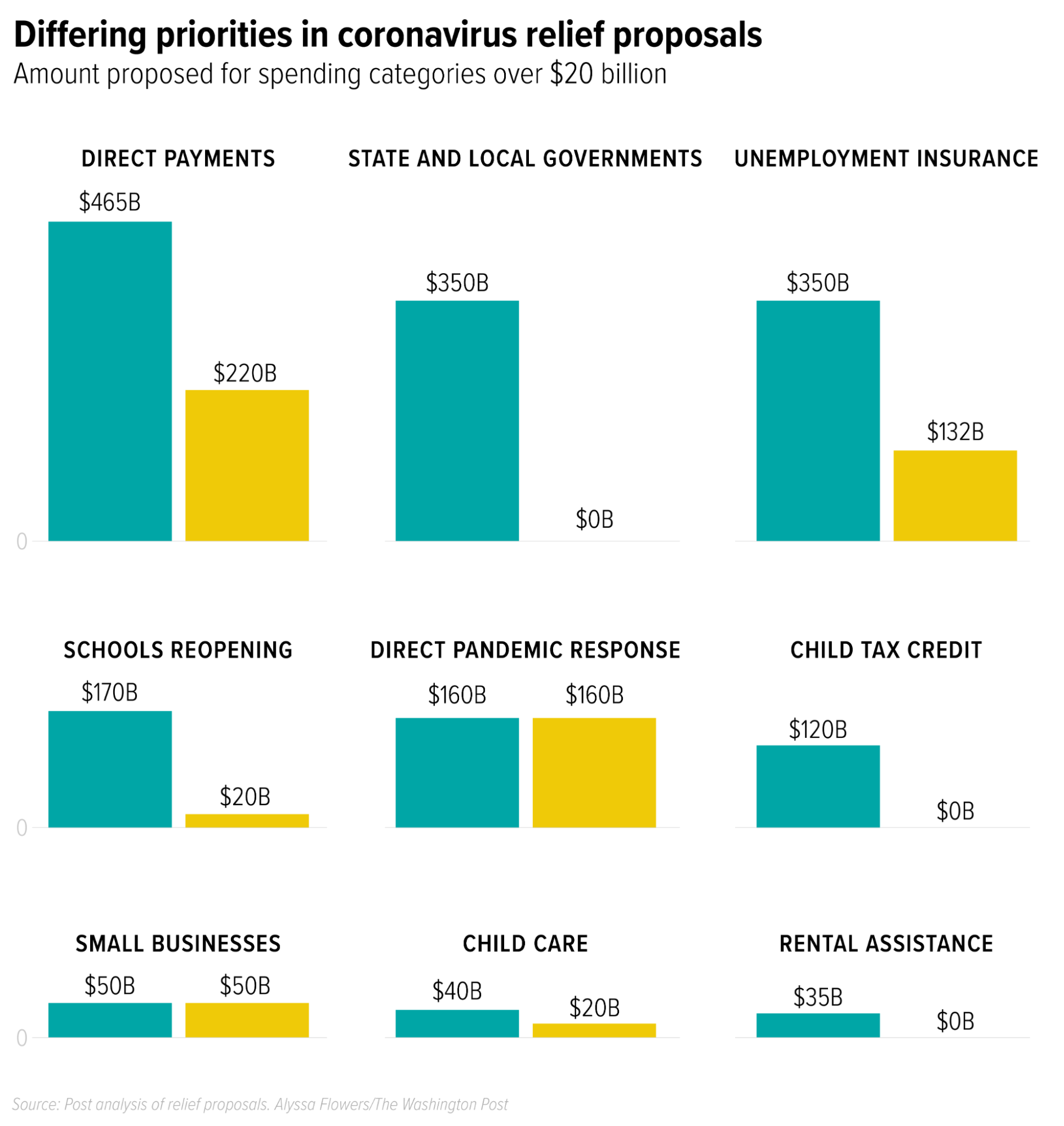 The survey found that simply showing voters what’s in both parties’ stimulus proposals made them far more likely to back the bigger package—especially Republicans. Showing voters the chart caused net support for the Democratic plan to shoot up from a 17-point margin to a 31-point margin.

These effects were most concentrated among Republican voters: GOP respondents in the control group preferred the smaller package by an 18-point margin. But when they were shown the chart, their opinion swung dramatically towards a bigger stimulus, favoring the larger package by a 16-point margin.

Altogether, this means that simply showing Republican voters what’s in each stimulus package — and how their party’s platform would actively undermine some of their top priorities — results in a 34-percentage-point swing in their stimulus preferences. 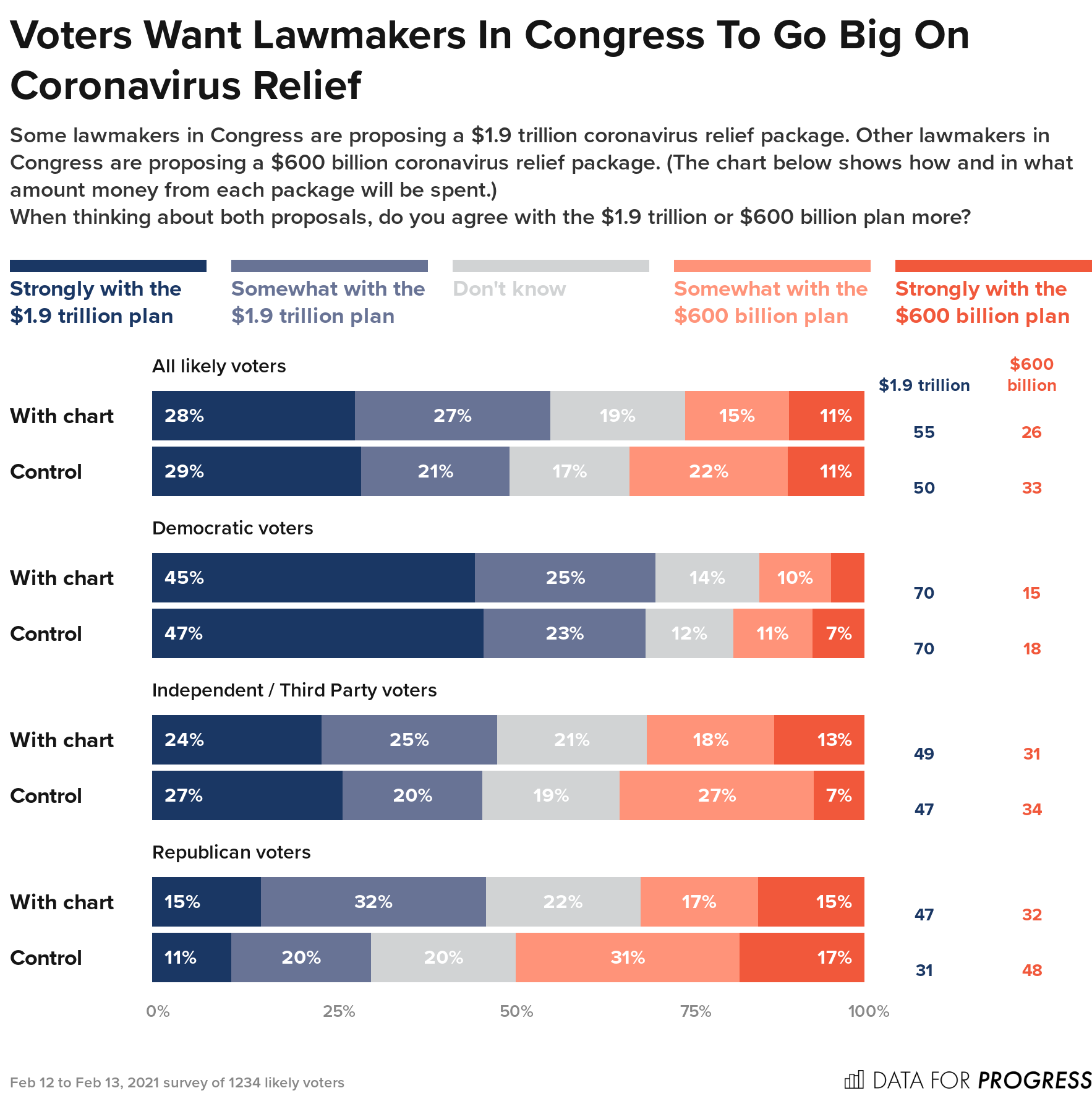 The effect wasn’t limited to Republicans—voters who self-identify as independents swung six-points towards the larger package, while Democrats swung five-points.

The verdict is clear: voters across the political spectrum support this highly ambitious relief package, and simply showing them that the Democratic proposal invests more towards their priorities can sway both Republicans and Independents. That means for Democrats to boost their popularity and win future elections, they need to pass this bill — then flood the zone with information about what the bill includes and how it will impact their lives.

President Biden’s Chief of Staff Ronald Klain seems to share this belief, arguing that Democrats can unify the country and gain support from voters across partisan lines by going bigger and bolder (not smaller) on coronavirus relief. While the GOP argues that a $1.9 trillion stimulus is “divisive,” Data for Progress’ polling shows that Klain and the Biden team are exactly right: the way to unify the country isn’t to go small—it’s to make a huge investment in the American people.

Methodology: From February 12 to February 13, 2021, Data for Progress conducted a survey of 1234 likely voters nationally using web panel respondents. The sample was weighted to be representative of likely voters by age, gender, education, race, and voting history. The survey was conducted in English. The margin of error is ±2.8 percentage points.