A stimulus check issued by the IRS to help combat the adverse economic effects of the COVID-19 outbreak is seen in San Antonio, Thursday, Jan. 28, 2021. (AP Photo/Eric Gay)

A stimulus check issued by the IRS to help combat the adverse economic effects of the COVID-19 outbreak is seen in San Antonio, Thursday, Jan. 28, 2021. (AP Photo/Eric Gay)
Written By Zac Petkanas

On Monday, 10 Republican senators visited the White House on the pretense of negotiation with one goal and one goal alone: shrinking the coronavirus-relief package President Biden ran and won on, in the false name of bipartisanship. The problem? American voters—including members of their own party—could hardly disagree more with these Republicans.

This week, Invest in America, along with the progressive think tank Data for Progress, released polling data that assesses the public’s opinion of critical parts of Biden’s American Rescue Plan, like funding for vaccine and testing distribution, support for small businesses, and extended moratoriums on utilities or evictions.

It turns out that even in a nation as divided as ours, voters overwhelmingly agree: it’s time to go big and invest in America.

Take unemployment insurance. The current Republican proposal would slash Biden’s unemployment plan by $100 a week, and strip three months of its benefits, even as the virus still rages, keeping millions of people out of work. That’s not what voters want: 73 percent of Americans support extending and expanding current unemployment benefits that are set to expire in March—including 63 percent of Republicans.

What about emergency aid for states and cities trying to prevent layoffs of essential workers and maintain services while effectively distributing the vaccine? The Republican proposal cuts all of the $350 billion dollars Biden proposed for this funding (for reference, that’s less than half of the Pentagon’s annual budget). And despite Republican claims of seeking bipartisanship, 76 percent of voters within their own party support increasing state and local funding.

Republicans even seek to slash coronavirus checks, repeatedly shown to be one of the most popular relief proposals. They ask Biden to cut his  proposed $1,400 checks—supported by 77 percent of the American electorate!—by $400.

The list goes on: Republicans want to strip the $15 minimum wage—which would be the first federal minimum-wage increase in more than a decade, and which a majority of Americans support. They hope to cut the child tax credit, which 70 percent of voters support. And they want to gut funds to help schools reopen safely, over the objections of 74 percent of Americans who support the funding. 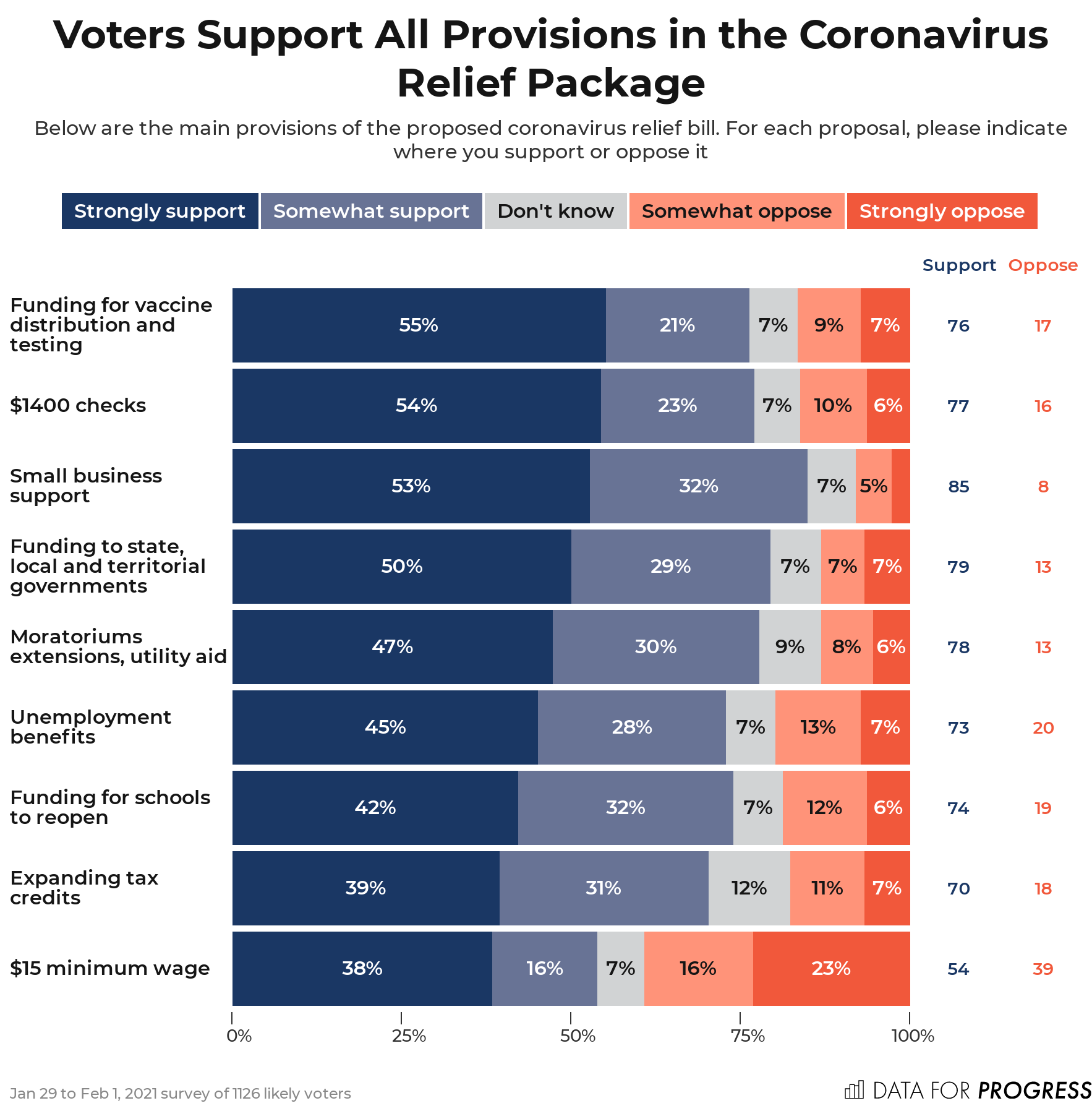 The simple fact is that Republican senators aren’t truly interested in bipartisanship. Instead, they seek to sabotage the recovery using the same strategic playbook they used a decade ago during the last economic crisis. The austerity they forced on the country led to a slower recovery and longer time before millions of Americans felt relief—precious time we didn’t have then and certainly don’t have now.

So it’s time for us to break this pattern. We need an end to the small thinking, pettiness, and underinvestment in our communities that has limited economic growth.

And we can begin that work by pursuing solutions that Democrats, independents, and Republicans want: making the investments that match the scale of this crisis. Going big is bipartisan—and it’s what will get us through this crisis and out on the other side stronger than we were before.