Over the last several years, Republicans and their policies have grown increasingly extreme. The party has pushed past the bounds of acceptable behavior time and again, and become a font of bigotry, lies, and conspiracy theories.

In a new Data for Progress poll of 1,254 likely voters fielded from July 30 to August 2, we examined voter attitudes towards top Republican policy priorities and some of their most prominent actions over the past year. The actions we polled included widespread GOP claims that the 2020 presidential election was stolen, and comments comparing mask mandates to the Holocaust. We find that a majority of likely voters broadly disapprove of the Republican Party’s priorities and actions, and disapprove most strongly with Republican conduct around the 2020 election and the recent conduct of Republican elected officials.

One of the most toxic figures in GOP politics is Rep. Matt Gaetz (R-FL), a notorious and omnipresent figure, whose grew his profile through unwavering support for Trump, his objections to the 2020 Electoral College certification, and—most recently—a federal investigation of his involvement with a minor and potential sex-trafficking crimes. Of the actions we polled, voters disapprove the most of Gaetz’s criminal sex scandal by a 59-point margin. We also tested comments by Rep. Marjorie Taylor Greene (R-GA), who compared the House of Representatives’ mask mandate to the Holocaust, and found voters disapprove of her comments by a 45-point margin.

Controversial personalities aren’t Republicans only problem. Voters also overwhelmingly disapprove of their encouragement of the violent protests at the U.S. Capitol on January 6 by a 55-point margin. Voters disapprove of GOP objections to the Electoral College by a 21-point margin, and Republican claims that the election was stolen by a 19-point margin.

The only two aspects of GOP politics that polled anywhere close to even were the party’s support for Donald Trump and its record of confirming conservative judges to lifetime appointments on the federal bench. Still, in both cases, a plurality of voters disapprove of these extreme positions.

Lastly, a strong majority of likely voters disapprove of the policy priorities that Republicans have pursued over the past years. The most unpopular policies we polled were tax cuts for corporations and the wealthy, and laws making it more difficult for people to vote: Voters disapproved of these policies by a 58-point margin, and a 57-point margin, respectively. They also disapprove of the party’s climate-change denial and their efforts to block climate-change legislation by a 55-point margin. 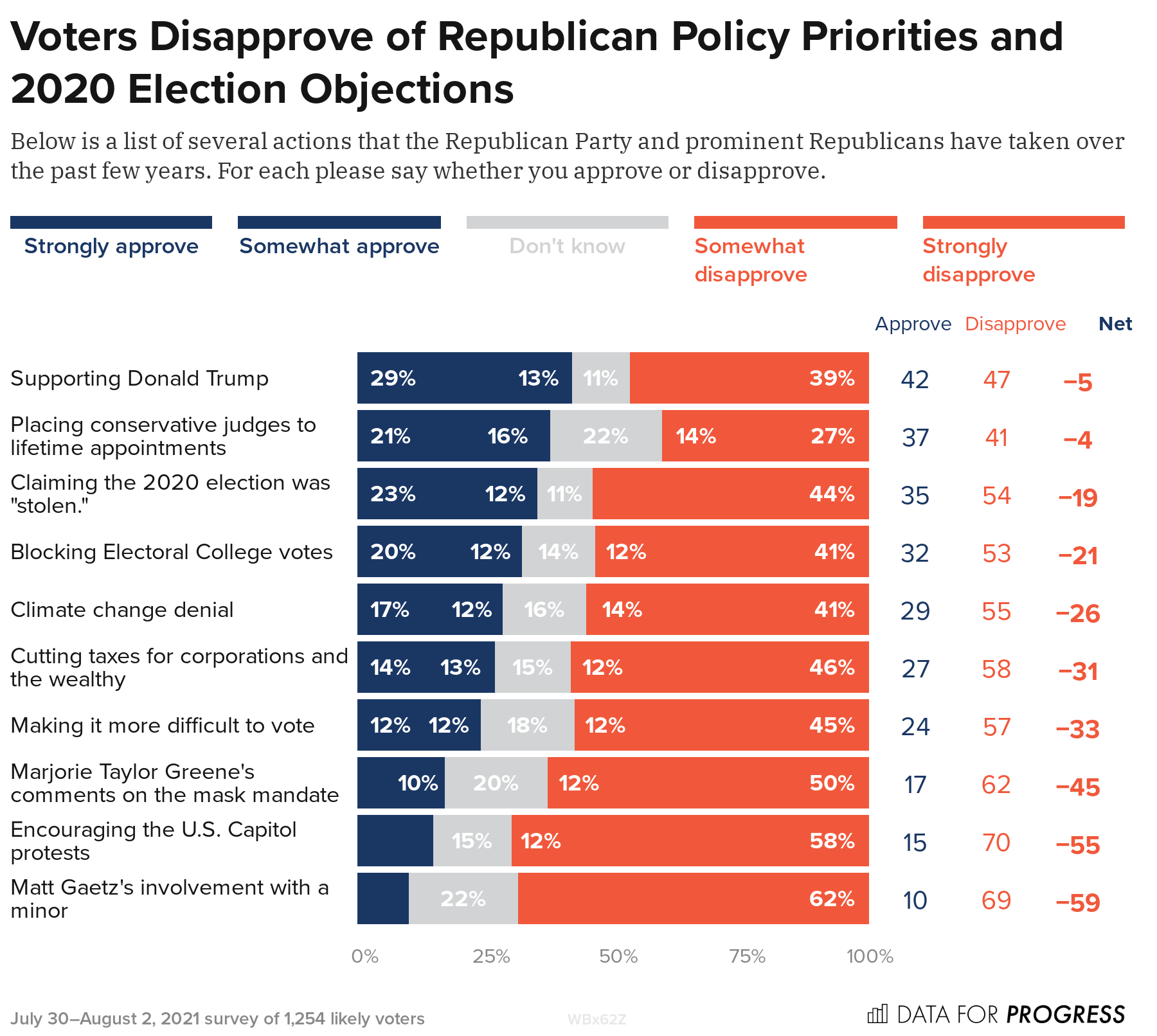 These high levels of disapproval remained consistent among large majorities of Democrats, independents, and Republicans, though they’re especially strong among Democratic voters. Our findings indicate that of all the GOP’s political liabilities, Democrats are most disturbed by the party’s reaction to Donald Trump losing the presidential election to Joe Biden.

Only Gaetz and Greene reach these levels of disapproval, which is to say Democratic voters view the insurrection and Trump’s efforts to seize an unelected second term as dimly as they view statutory rape and making light of the Holocaust. 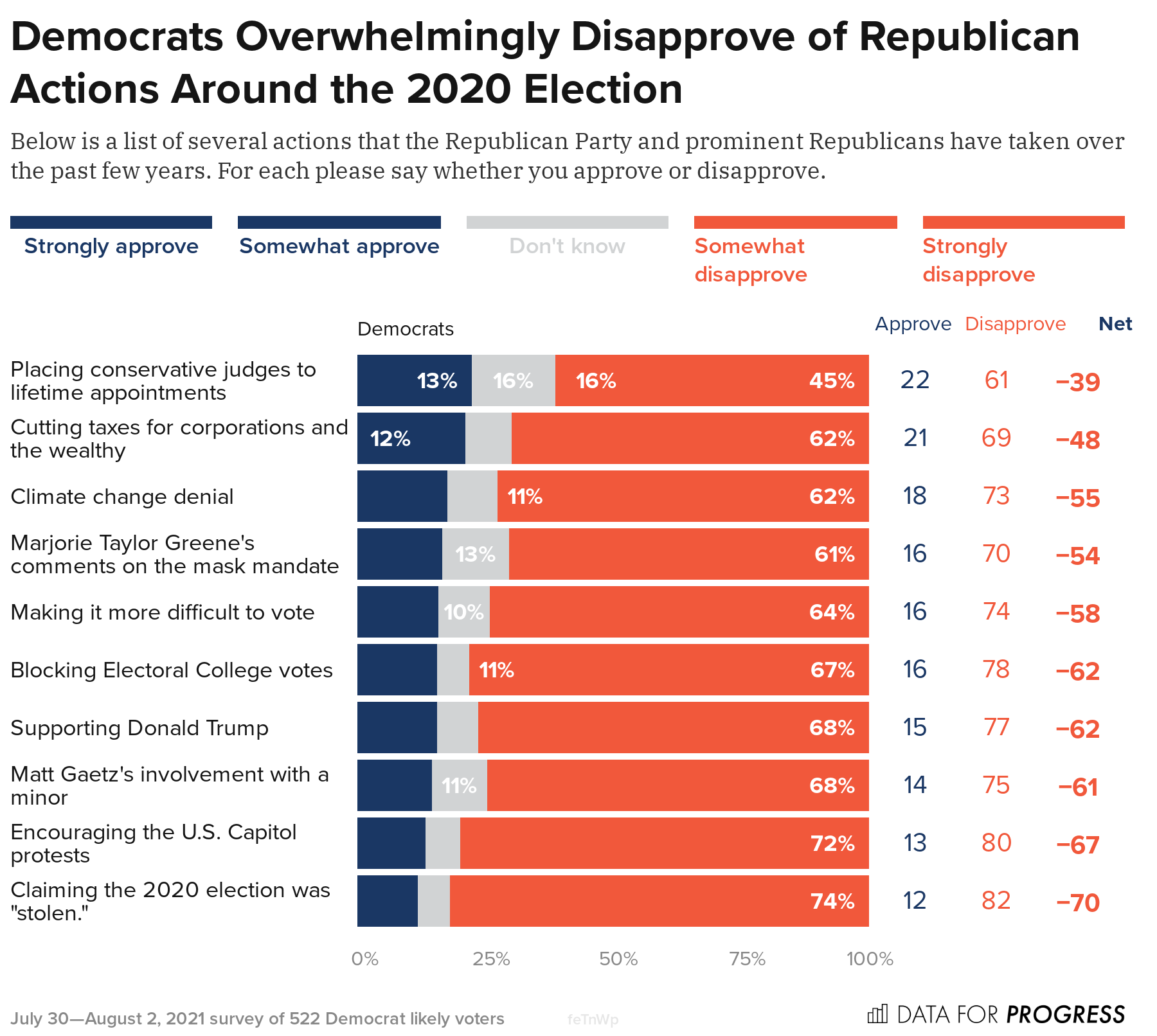 The outlook isn’t much better for Republicans among independents. They disapprove of Gaetz sending money to underaged women by a 69-point margin; of Republicans encouraging violent protests on the U.S Capitol  by a 57-point margin, and of Greene’s comments by a 49-point margin.

Independents likewise oppose striking down sections of the Voting Rights Act and making it more difficult for Americans to vote by a margin of 36 points, and are against cutting taxes for corporations and the wealthy by a margin of 31 points. 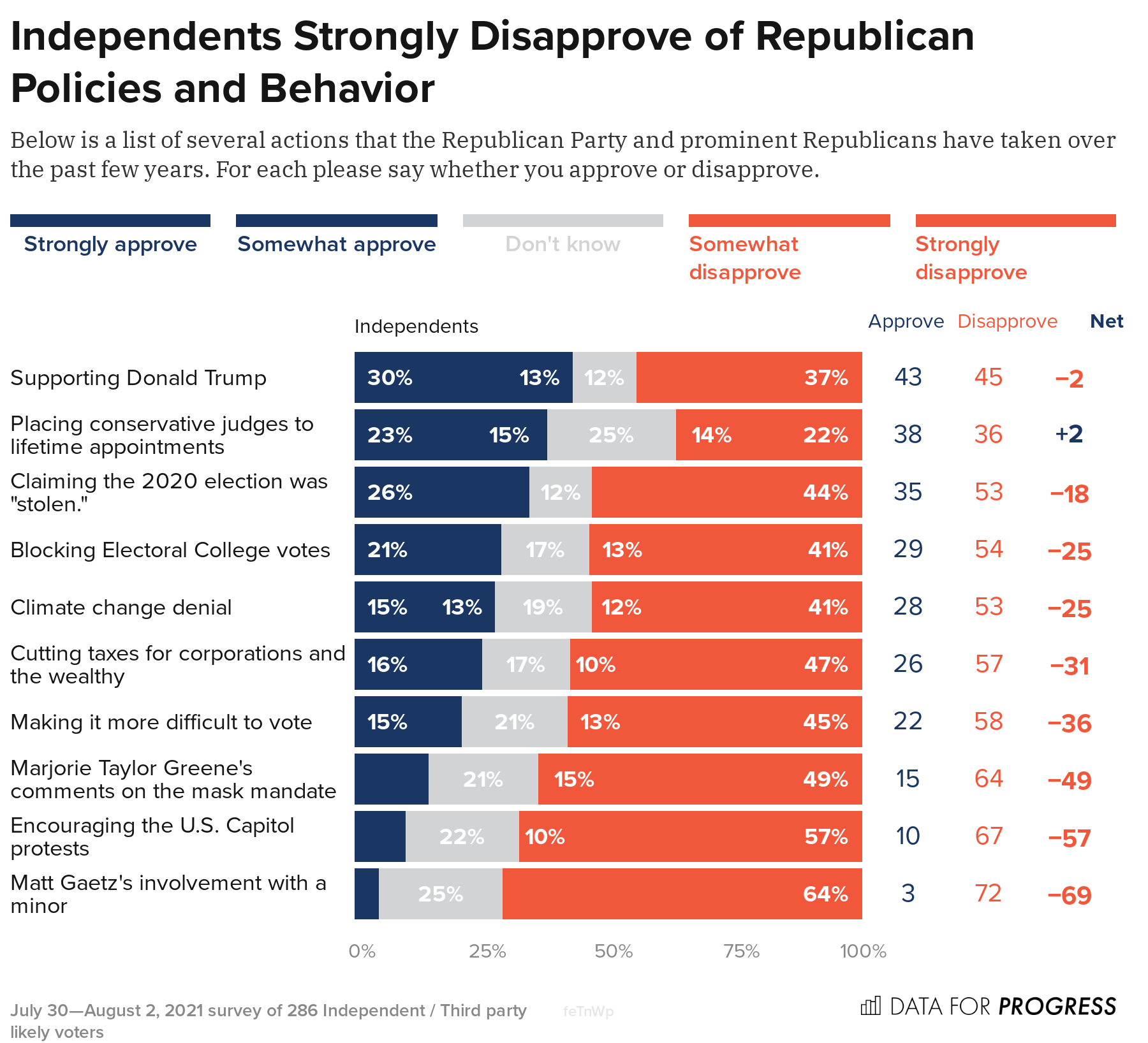 Likely Republican voters are, unsurprisingly less-hostile to the GOP than Democrats and independents, and even approve of Republican objections to the Electoral College vote and of claims that the election was stolen. However, we also found that some GOP antics and scandals are too toxic for their own voters.

They disapprove of Gaetz’s conduct by a margin of 50 points, of Greene’s comments by a 35-point margin, and of encouraging the violent assault on the U.S Capitol by a 40-point margin.

Republican voters also disapprove of cutting taxes for corporations and the wealthy and striking down sections of the Voting Rights Act to make it more difficult to vote by 10- and two-point margins, respectively. 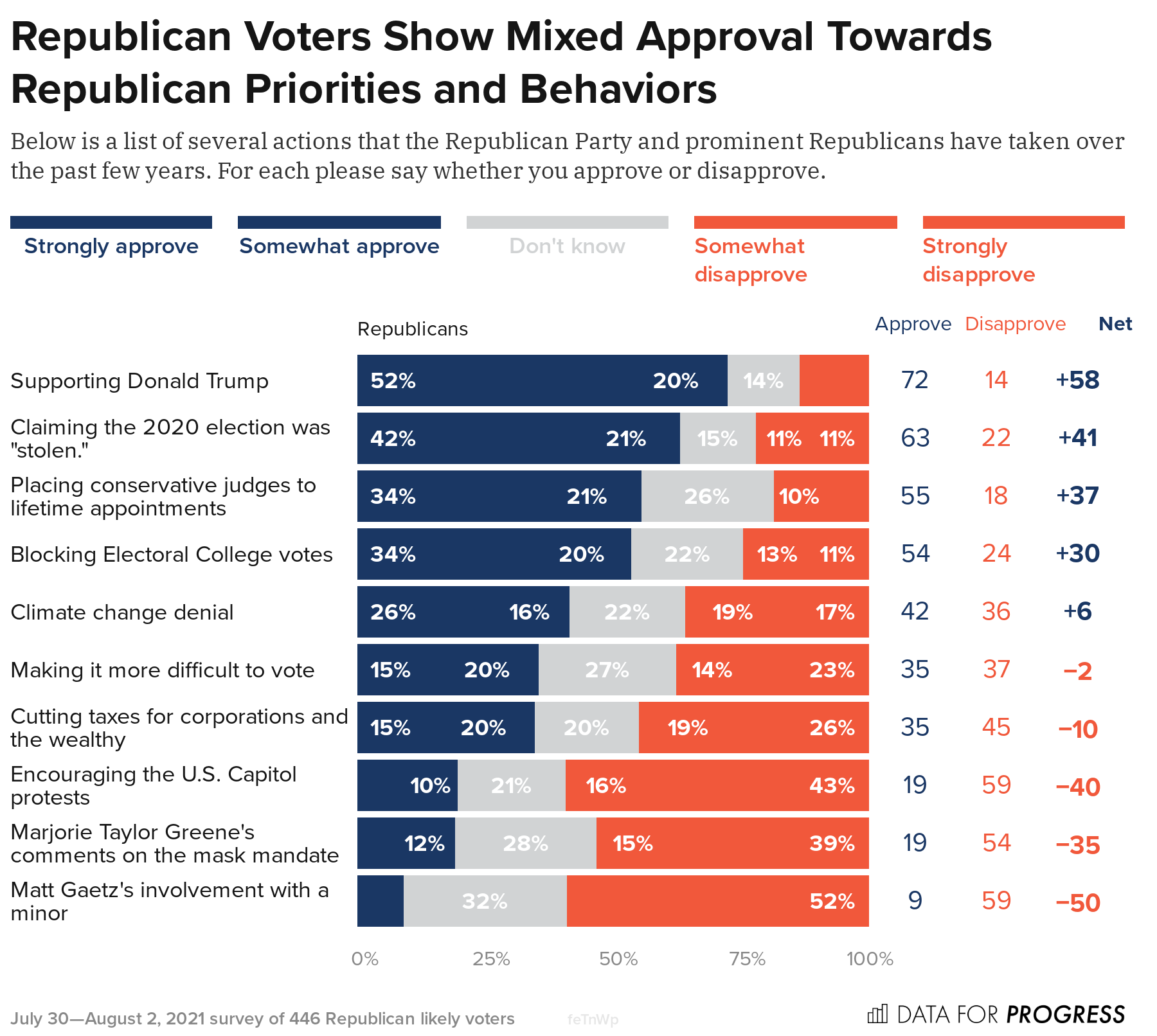 This polling makes it clear that voters, even Republican voters, can’t tolerate many of the actions and policies that define the GOP. It’s clear that the path the Republican Party has taken in recent years isn’t just morally wrong, it’s also politically risky. Republican politicians aren’t delivering for their constituencies or their voters and it’s important that we replace them with politicians who will.

Evangel Penumaka is a senior analyst at Data for Progress.

Devi Ruia is a press assistant at Data for Progress.

From July 30 to August 2, 2021, Data for Progress conducted a survey of 1,254 likely voters nationally using web panel respondents. The sample was weighted to be representative of likely voters by age, gender, education, race, and voting history. The survey was conducted in English. The margin of error is ±3 percentage points.