Progressives breathed a sigh of relief last week when Chief Justice John Roberts voted with the Supreme Court’s liberal justices to at least temporarily block a law that would have effectively banned abortion for most women in Louisiana. For buying reproductive rights a longer lease on life, and for his willingness to shut down the Court’s four other conservative justices, he was once again rewarded with fawning press coverage. The Associated Press beamed, “Abortion case shows Roberts firmly at Supreme Court’s center.”

He must be used to this by now. Judging by the headlines alone, Chief Justice John Roberts established himself as a bona fide moderate long ago, and with such authority that the moniker gets bandied about as if it were an empirical fact.

“John Roberts, Moderate Hero?,” asked The Atlantic after Roberts upheld the constitutionality of the Affordable Care Act. BuzzFeed recently claimed that Roberts had, “shifted to a more moderate position.” In other coverage, Roberts has been described as a “swing vote” and an “institutionalist.”

Based on this kind of coverage, it’s no surprise that Democrats and independents widely believe in the myth of Roberts-the-moderate. But it is a myth, and the fact that so many people don’t understand that is both disturbing and a real danger to the progressive agenda going forward.

Polling for the judicial watchdog Pack The Courts, completed by YouGov Blue, suggests that public opinion about the Court is driven by asymmetric partisanship. The data shows that Justices Roberts, Ruth Bader Ginsburg, and Sonia Sotomayor are the most popular justices.  Independents narrowly approve of all the Justices except for Brett Kavanaugh. But while Republicans have negative perceptions of every justice appointed by Democrats, Democrats have a positive view of Roberts. Across the 1,282 voters we polled at the end of January of 2019, we found that only Kavanaugh had a net negative approval rating, and even he is only seven percent under water. 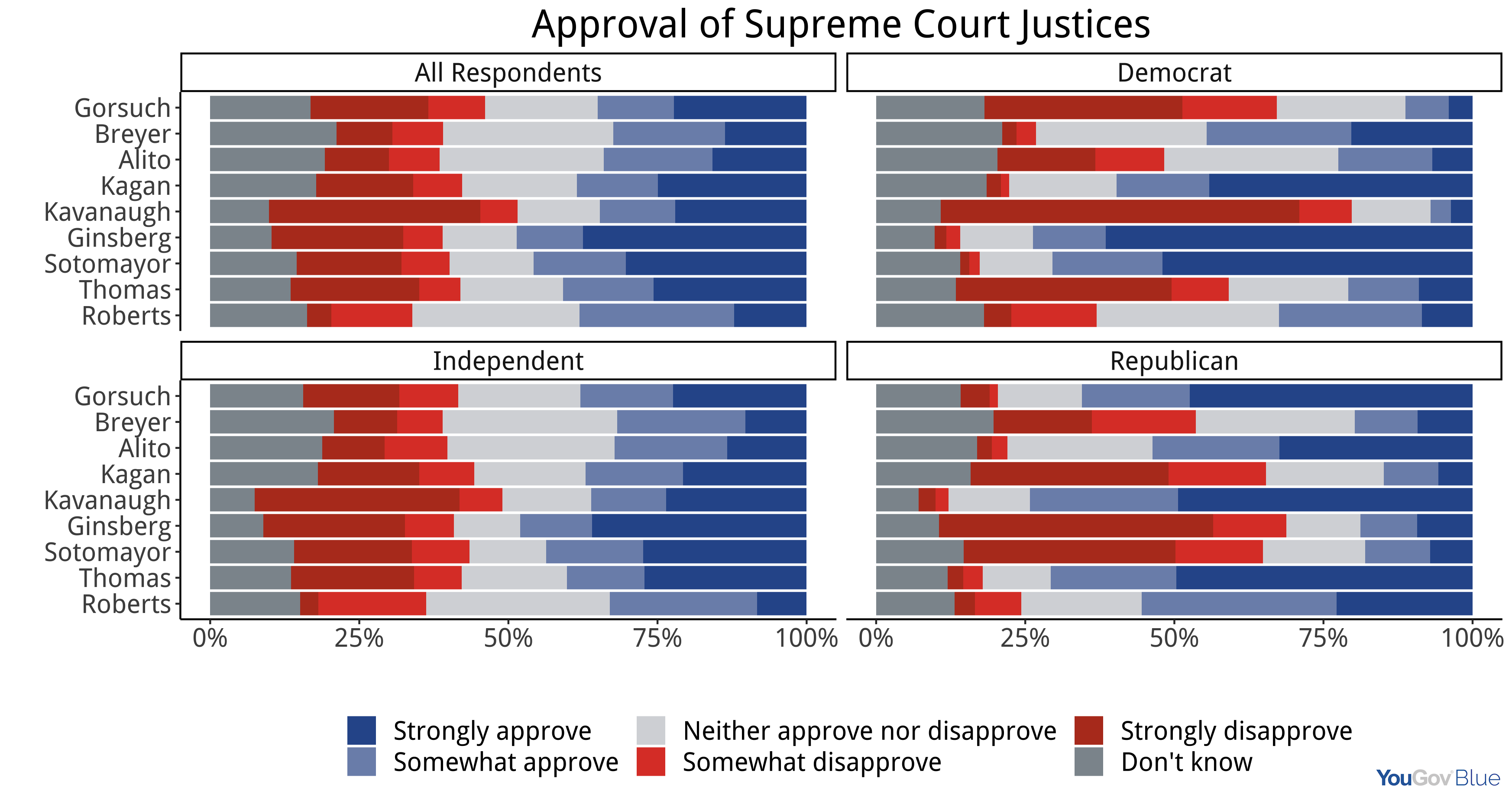 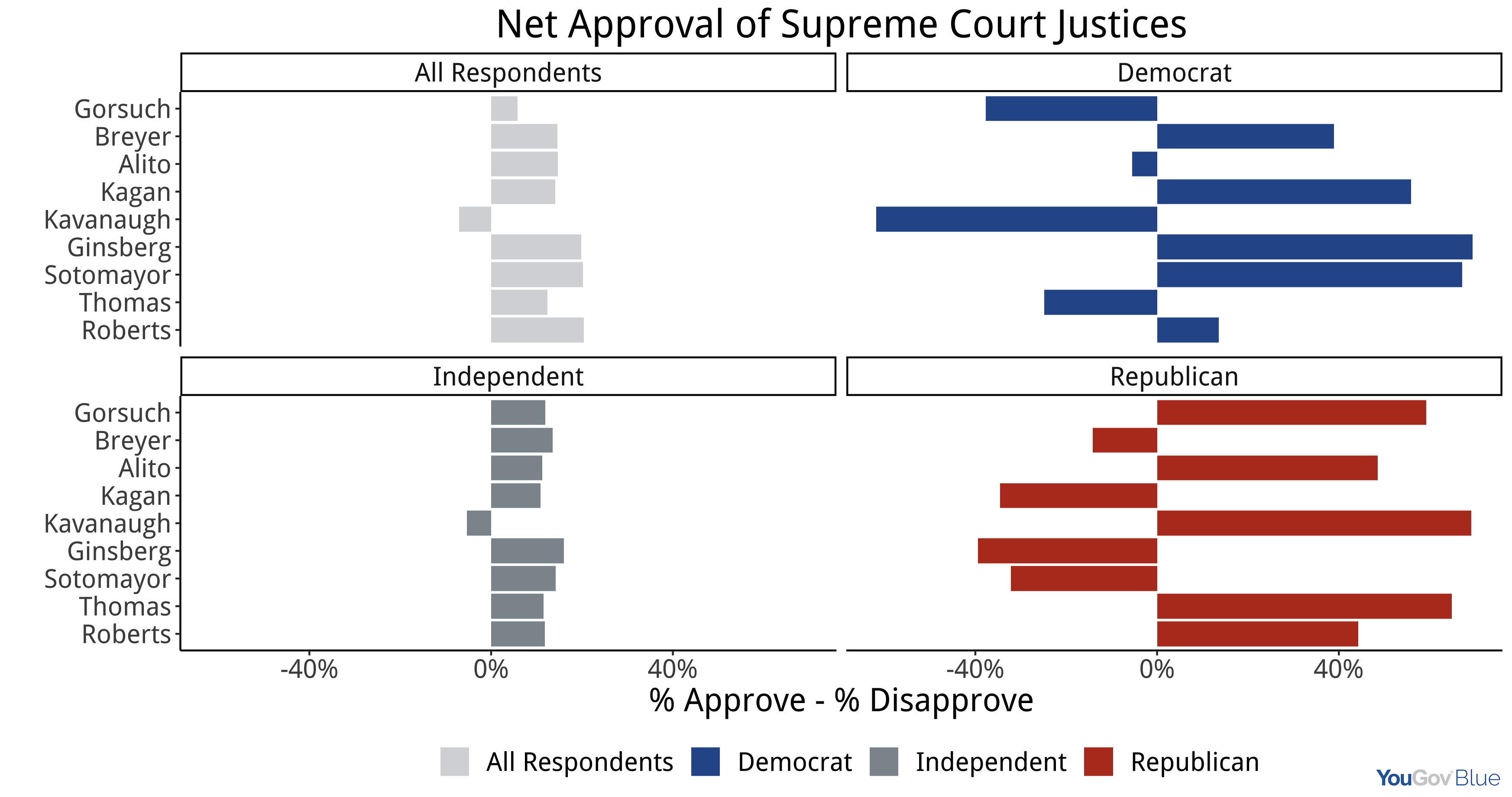 These findings reflect the range of political awareness among the general public. To gauge our respondents’ political knowledge, we also asked them how many justices sit on the Supreme Court and to identify the chief justice of the United States. Roughly 48 percent of our respondents answered both questions correctly. Fifty percent of the politically knowledgeable Democrats identified Roberts as conservative, and seven percent as very conservative. Just nine percent of politically knowledgeable Democrats did not have an opinion of where Roberts fell ideologically.

Despite these numbers, Roberts’ record and judicial philosophy skews much further right than moderate. John Roberts has attempted to cut a non-partisan, possibly centrist figure. He scolded President Trump when Trump complained about an “Obama judge” and has wrung his hands in public over the Court’s image. But inside the Court, things are much different.

For 13 years before the confirmation of Brett Kavanaugh, Roberts worked diligently to produce 5-4 decisions that swung overwhelmingly conservative. He voted with the conservative majority in such consequential and devastating cases as Shelby County v. Holder, which gutted the Voting Rights Act; Citizens United, which flooded politics with dark money; and DC v. Heller, which expanded gun rights dramatically.

And when he has failed to log a victory for conservatives, as when the Court in Obergefell v. Hodges recognized LGBT Americans’ right to marry, he has pouted in his dissent, writing in that case that, “If you are among the many Americans—of whatever sexual orientation—who favor expanding same-sex marriage, by all means celebrate today’s decision. Celebrate the achievement of a desired goal. Celebrate the opportunity for a new expression of commitment to a partner. Celebrate the availability of new benefits. But do not celebrate the Constitution. It had nothing to do with it.”

In the face of such a record there has been a disproportionate focus on Roberts rare  apostasies from conservative dogma (such as his two decisions blocking conservatives from gutting the Affordable Care Act, his public comments about the Court, and his highly conditional abortion decision last week). As such, the average voter polled may mistake these headlines as the rule rather than the exceptions. Data from FiveThirtyEight shows that Roberts has only cast a pivotal liberal vote five times.

If Roberts feels unconstrained politically, there are reasons to worry he’ll begin more aggressively striking down progressive laws and priorities, and he’ll face significant pressure to. It’s near certain that conservatives will work to convince the Courts to strike down a Green New Deal, Medicare for All or a wealth tax.

There is some good news in our data: Democrats don’t view the Court as a neutral arbiter, and instead believe that justices allow politics to determine their decisions. It is not uncommon for partisans to lower their approval of a branch of government when their party is not in power, and the current environment is likely no exception. A majority of Democrats believe the current Supreme Court mostly plays politics, while a majority of Republicans believe the Court mostly just interprets the Constitution.

Going forward, it’s important for progressives to demystify the Court, and give their voters a sense of Roberts’s real agenda. If we don’t, we might spend the coming years watching Roberts single-handedly gut the progressive agenda, and have no political recourse.

Sean McElwee is a researcher and writer based in New York City. He is co-Founder of Data for Progress and Director of Research and Polling for Pack the Courts.

Aaron Belkin is Professor of Political Science at San Francisco State University and Director of Pack the Courts, an initiative urging Democrats to expand federal courts.

Stop the Kavanaugh Court, Save the Progressive Agenda

Democrats must prepare to reverse these illegitimate Supreme Court decisions one way or another. But first they have to start paying attention.

The Trumpification of the Supreme Court

The lesson of the Kavanaugh fight is for the masses is to mobilize as if their lives and livelihoods depend on it—for many of them, it does.

Everything about the Kavanaugh pick stinks, and senators ignoring the full circumstances of his nomination are hiding like cowards from the obligations of their offices.

How Brett Kavanaugh Discredited Himself

Republicans Marched Into A Buzzsaw

Republicans were institutionally incapable of taking Blasey Ford's allegation seriously. To do so, they would have had to be willing to cut Kavanaugh loose, and all that would entail.