From the morning of September 11, 2012, until the right’s obsession with the attack on a U.S. diplomatic facility in Benghazi, Libya, mysteriously vanished in November of last year, liberals were understandably aghast at the GOP’s willingness to use the blood of four dead Americans as partisan warpaint in their battle against Hillary Clinton.

Republicans were, of course, undeterred by appeals to decency, and instead spent years feeding conservative conspiracy theories about the attacks until their countless Benghazi investigations gave rise to the email investigation, and, from there, the election of President Donald Trump.

Because there is such an obvious throughline between the ghoulish way Republicans decided to respond to the attack in Benghazi five years ago, and their consolidation of political power today—because, in other words, their unprincipled obsession with Benghazi “worked” as intended—Democrats are understandably drawn to the idea of treating turnabout as fair play. Earlier this year with his son-in-law Jared Kushner and political adviser Steve Bannon by his side at a White House dinner, Trump greenlit a raid in Yemen that went horribly awry, resulting in the deaths of one Navy SEAL and and several civilians—children among them.

Niger is @realDonaldTrump‘s Benghazi. He needs to own it.

It is to our general betterment, though, that Wilson’s instincts here are an exception to the rule in Democratic politics. There is a lesson to be learned from the consequences of the Republican Party’s selective exploitation of Benghazi and selective indifference to military tragedies under Trump, but it isn’t a lesson for Democrats to learn. It is rather a lesson everyone invested in American political culture—but most particularly its chroniclers in the political media—should learn about the ways the country’s two major political parties think about the value of information, and how the differences influence what we as a polity deem meaningful in public discourse.

In each case the institutions of the right responded to key developments instrumentally, revealing through the shifting scenes and casts of characters that their animating concerns weren’t protecting Americans serving in dangerous parts of the world, or protecting women in the workforce from powerful, abusive men, but making partisan brickbats of those incidents when possible, to advance unrelated goals.

The institutions of the left, by contrast, addressed each event in close to neutral fashion, guided primarily by their commitments to competent governing, and the physical well-being of fellow citizens.

This illustrates a fundamental characterological difference between the American left and the American right. And, if we aspire to root our political culture in reason, empiricism, and good faith, it should inform how we sort political controversies—what we do and don’t lend credence and emphasis to—as we debate policies and select political leaders.

Republicans in Congress and conservative media outlets like Fox News spent years leading mainstream journalists around by the nose in pursuit of fabricated conspiracy theories, alluded to but never clearly articulated. Liberals, including congressional Democrats, believed that Benghazi was the consequence of policy errors—inadequate embassy security, the invasion of Libya—that should be investigated soberly so they could be avoided in the future.

That, generally speaking, is the liberal posture in the aftermath of the ambush in Niger. Democratic congressional leaders have remained largely silent, letting Republicans like Sen. John McCain (R-AZ) speak for them in seeking a thorough but fair-minded inquiry. Most Republicans, by contrast, have lost their appetite for sustained executive branch oversight of any kind, and allowed their investigations to be underfunded or sabotaged. So inconsistent are Republicans on the question of scrutinizing presidential administrations that their most prominent investigator, Trey Gowdy—the face of the Benghazi inquisition, and, until January, a tribune of congressional investigative independence—has been drained of his prosecutorial zeal, and laments that “Congressional investigations unfortunately are usually overtly political investigations, where it is to one side’s advantage to drag things out.”

There is, of course, no rule that says members of Congress must feed conspiracy theories against the opposition while running interference for their own party’s leaders.

Last week, the Senate quietly completed what’s known as “votearama”—a rare legislative interlude in which senators must process an unlimited number of amendments—before passing a Republican budget resolution. Votearama would have been an ideal staging ground for a minority party to turn Niger into a grotesque partisan spectacle, and it speaks volumes about the parties that Democrats demured.

Meanwhile, conservatives feigned interest in Harvey Weinstein’s conduct long enough to convince gullible pundits that Democrats had a Harvey Weinstein “problem.” Those same conservatives have now retreated to awkwardly ignoring standing accusations against right-wing eminences like Bill O’Reilly and President Trump, in part because liberals universally condemned Weinstein and made him a pariah. Conservatives, by contrast, made Trump president.

The way conservatives weaponize information contributes to a deep asymmetry in American political tribalism. But it also distorts the public’s sense of what’s significant, and what is not, in ways that are useful to conservative politics, but corrosive to public trust in government, media, and other civic institutions. This doesn’t mean that conservatives are always lying. Though it stemmed from a disingenuous place, their critique of Harvey Weinstein, and the culture in which he flourished, was more correct than not, and contributed to the proper result, which is that the vast majority of Americans now view Weinstein as a monster, and the entertainment industry as a magnet for that kind of predation. But the disingenuousness matters. It’s how operatives who ultimately want to destroy the vocation of journalism cow the journalists they disdain into chasing phantoms and generating controversies where none exist. It’s how a corrupt and racist authoritarian who lies like he breathes can run for president, and what the public hears is this: 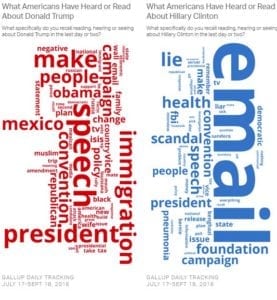 American political culture may be beyond redemption, but it certainly won’t be redeemed if we can’t learn to sort fake outrages from real ones, when the pattern of manipulation is staring us in the face.

Trump's White House is in turmoil over Omarosa's recordings. So we asked Lauren Mayberry of Chvrches to perform a dramatic reading of Omarosa's dramatic prologue. Plus, a year after Charlottesville, white nationalism has found a home on Fox News. The EPA is rolling back fuel standards with the help of spin from Sinclair. Black athletes have always been told to "shut up and dribble." And Mark Burnett should not be treated as a respectable figure while he engages in a coverup on behalf of Donald Trump. Also, Stephen Miller's uncle is done with his nephew's bullshit. And possible 2020 contenders should stop being coy. Christine Mai-Duc of the LA Times, Gonzalo Cordova, and Emily Axford join Jon to break down the week's news as we wait on the edge of our seats for more tapes.

Michael Cohen, welcome to the resistance.

Trump partially reverses his family separation policy with an executive order that leads to more chaos and confusion, and Republicans take another run at repealing Obamacare and gutting Medicare. Then Democratic candidate for governor Stacey Abrams talks to Tommy and Dan about her historic candidacy and how she plans to turn Georgia blue.

Trump hits a bump in the road on his way to the Nobel Peace Prize, Republicans try their hardest to make 2018 about immigrant gang members, and 700 Trump investigation stories break in one day. Then Jason Kander joins Jon and Dan to talk about the midterms and the new season of Majority 54, and Inimai Chettiar of the Brennan Center for Justice talks about the prison reform bill moving through Congress.

Michelle Wolf destroys democracy with jokes at the White House Correspondents’ Dinner, and Trump moves closer to withdrawing from the Iran deal. Then CNN’s Jake Tapper joins Jon, Jon, and Tommy to talk about politics, the press, Trump, and his new book, The Hellfire Club. And DeRay Mckesson calls in to talk about Seattle’s move to abolish marijuana convictions, and the brand new season of Pod Save the People.